Does Your Dishwasher Keep Stopping? This Might Be Why

If you absolutely hate doing dishes, your dishwasher is no doubt one of your most prized home appliances. After all, it takes the hard work out of the most repetitive of all household chores. But what if your dishwasher suddenly stops mid-cycle and the problem persists regardless of how many times you try to run it again?

Before you try fixing it panic, read on to find why your dishwasher might be stopping and the various fixes to try.

Most dishwashers start and stop multiple times whenever they drain. But if your dishwasher keeps on stopping mid-cycle it might have a problem and here are probable culprits:

A Broken or Damaged Latch

Your home’s circuit breaker will automatically trip when a single appliance is consuming too much energy to prevent potential electrical fires. So, if the door seems to be in perfect working condition and your dishwasher has never stopped mid-cycle before, the issue might be just a tripped fuse. Fixing it is as simple as resetting the breaker.

While at it, note, although a tripped fuse is easy to fix, if it keeps on tripping it might damage your dishwasher and other home appliances. Have your home’s wiring inspected if it occurs again.

Most modern dishwashers feature a thermal fuse to protect them from overheating. When the fuse detects extreme heat, it automatically trips to prevent motor damage consequently causing your dishwasher to stop mid-cycle. Note, once it blows, a thermal fuse needs replacing.

Check whether it’s blown to determine whether it’s the culprit behind your dishwasher woes. Besides overheating, a faulty thermal fuse could also be as a result of:

How to Replace the Dishwasher Thermal Fuse

If your dishwasher keeps stopping due to a blown thermal fuse, you’ll need to replace it. Here’s how you go about it:

During cleaning cycles, the dishwater motor facilitates most of the action by spinning the spraying arms. A damaged motor usually fails to produce enough water pressure causing the dishwasher to stop during the cleaning cycle. Faulty dishwasher motors are usually as a result of excess soap buildup or problems with the circulation pump.

If nothing is done, the motor deteriorates overtime and may cause seal damage resulting in water leaks. It’ll also fail altogether. Replacing it is the most efficient way to solve the problem.  Check out how to replace dishwasher motor below:

In some instances, a faulty motor will continue humming even when your dishwasher stops. This shows it’s still receiving power, but due to damage cannot power your dishwasher’s spraying arms efficiently. Replacing it is still the most efficient solution.

Problems with the Control Board

Since it controls mos of the moving parts, a damaged control board will often cause your dishwasher to stop mid-cycle since it stops sending the required signals. Similar to most defective dishwasher machine components, the best way to fix the issue is by replacing the control board.

The vent and fan keep your dishwasher running at peak performance by forcing hot air out during the drying process. When the fan fails, air is accumulated preventing dishes from drying and causing your dishwasher to stop mid-cycle. The control panel will also go blank. Replacing the vent and fan assembly is the recommended fix.

The key to preventing problems such as the dishwasher stopping mid-cycle is proper maintenance. That said, here are a few maintenance tips to keep your dishwasher running at peak performance:

Sometimes your door latch assembly not closing properly can be as a result of food gunk accumulating around the edges, and on the rubber gasket.

To prevent your dishwasher from stopping mid-cycle due to door latch assembly issues caused by accumulated food gunk try to regularly clean the inside edges of its door, as well as the gasket.

Use an old toothbrush to loosen up the gunk and then give it a wipe down using a hot water and vinegar solution.

If you live alone and barely cook, you probably use your dishwasher countable times a month. Even so, try to run the self-cleaning cycle or cook and do the dishes more often using your as running dishwasher cycles regularly helps keep your motor and other mechanical parts such as the pump working properly. This in turn prevents dishwasher mid-cycle stops due to motor or mechanical issues.

Your dishwasher’s spinning arms are the reason why your dishes come out squeaky clean. But, similar to most parts of a dishwasher, they can also accumulate food gunk which overtime, can lead to clogging. Inspect them at least once a month, and remove food buildup using a toothbrush or a piece of wire. While at it, test them to ensure they’re spinning properly.

Don’t Forget to Clean the Filter

While cleaning your dishwasher, don’t forget to clean the filter. It prevents food debris from getting into the drainage, and failure to clean it regularly can leave your dishwasher with unpleasant smells. Every once a month, take it out, and thoroughly clean it using a water and vinegar solution. The vinegar will not only easily loosen the dirt, it’ll also eliminate any odors it might have accumulated.  Powdered lemonade is also another excellent option.

Call in a Professional

Every once a year, call in a professional dishwasher expert and let him/her inspect your dishwasher. This is the easiest way to catch and fix minor problems before they blow up into costly repair problems.

A dishwasher stopping mid cycle is annoying and frustrating to say the least. On the bright side, it’s a problem you can easily solve yourself by trying out the above fixes. 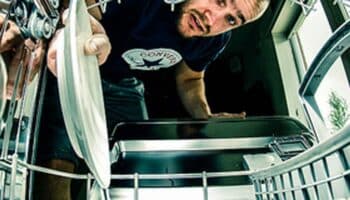 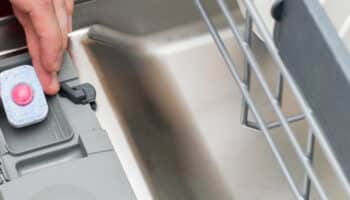 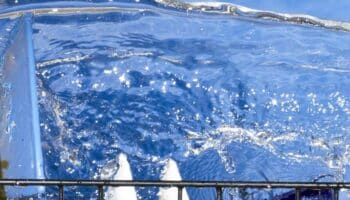 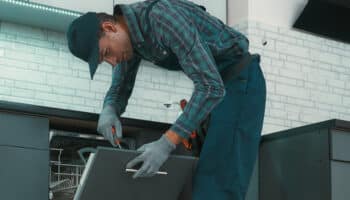