Freezer Not Working After a Move? Here’s How to Fix It.

Did you just get your stand-alone freezer delivered to your house after a move?  Or maybe you decided to move the freezer yourself… and in either case, is it not working now?

Don’t worry. This is a common problem.  Sometimes, freezers don’t function the way they’re supposed to right away after a move.  Which sucks because you normally want to start using them right away.

After all, you’re in your new place now.  Time to stock back up, right?  Part of moving in is getting the initial groceries bought and stocked out of the way.

So what do you do if your freezer is just not working or working right?

Below you’ll get explanations of why your freezer may be having issues and what you can do to address them.

Note: this article is in reference to stand-alone freezers, either upright or chest-types.  This is not written for a fridge/freezer combination. However, many of the tips can be applied to such units.

Contents show
1 #1 What Position Was Your Freezer Transported In?
2 #2 Don’t Plug It In Right Away
2.1 Why is compressor oil important?
3 #3 The Freezer Was Moved and Plugged in Right Away and Doesn’t Work
4 #4 The Freezer Was Allowed to Settle But Still Won’t Start
5 #5 The Freezer Was Shipped On Its Back and Won’t Work
6 Conclusion

#1 What Position Was Your Freezer Transported In?

The position the freezer was in during shipping, whether by a moving company or yourself, is important to know.  Knowing the position can help diagnose what the issue could be.  At a minimum, knowing the position gives you a starting point for troubleshooting.

The preferred position for transporting a freezer is in the vertical position, i.e. its normal position as it would sit in your home.  Sometimes, this just isn’t possible and it needs to be shipped on its side.  This would mainly be for a self-move where shipping space may be limited, i.e. the back of a personal pick-up truck.

If a moving company can’t ship it vertically, time to find a different moving company.  When the delivery arrives at your new place, inspect the position of the freezer in the truck before having it moved into your home.  Make note of whether it’s vertical or on its side.

If the freezer is on its back, ask how long it’s been on it’s back and note how far it had to travel.  Take pictures if you like.  This type of documentation will be important if you have issues later, especially if shipped on its back, and you have to file a complaint.

The reason shipping a freezer on its back is the worst position to use is because most of the internal components are along the back and bottom of the freezer.  All the weight of those components weighing down on the back of the unit while also getting jostled in transit can cause misalignments and irreparable damage to those same internal components.

If it’s upside down, be sure to take pictures!

#2 Don’t Plug It In Right Away

If your freezer isn’t working correctly or at all after a move, you might have plugged it in too soon.

A big key to understanding issues with a freezer after a move isn’t just knowing what position it was shipped in, although that is often the main source of any issues after moving, but also understanding you’re not just shipping a big empty box.

As mentioned with why you shouldn’t ship a freezer on its back, freezers have a lot of internal components that get jostled and vibrated during moving.  This includes compressor oil.

Why is compressor oil important?

So, after a move, you need to let the freezer stay still for a while to allow things like compressor oil to settle back to its normal position.  If you energize the freezer before this can happen, your compressor will not operate correctly or at all.  It’ll secure itself to prevent damage.

But it isn’t just compressor oil that needs to settle.  This also includes gases and coolants.  What you need to remember is the freezer doesn’t come ready to do its job right off the bat after a move.  It needs time to settle as an entire unit.  Time to allow it to return to its normal status as a unit before using it for operation.

It’s recommended that if you want to start using it, you should wait at least one to four hours before plugging it in if shipped in a vertical position.  This will allow enough time for the oil, gases, and coolants to settle where they’re supposed to be.

If it was moved on its side, it might be even better wait up to twenty-four hours.

The reason for this again comes down to the compressor and the oil in it.  It just takes longer to settle if shipped on its side.  You want to make sure enough time is given to drain any oil that leaked into the cooling tubes.

Okay, so let’s assume you didn’t know about the whole settling period needed after moving a freezer.  Not knowing about it, you plugged it in right away and discovered your freezer wasn’t working.

First, ensure you actually have power to the freezer.  That may sound insulting, but it isn’t meant to be.  It is a new home and just because it’s new to you doesn’t mean everything inside is new.  Which means there could simply be a power issue at the electrical outlet or the circuit breaker.

So, check to make sure there isn’t a power issue.  You can check the outlet by plugging something else in like a phone charger.  If you’re getting a charge, you know the outlet has power, which also means the breaker is working.

Now that you’ve checked the power, let’s figure out why your freezer isn’t working.

More than likely, because you didn’t let the freezer settle, it’s a compressor issue.  Oil probably got into the cooling tubes.  As a result, your compressor will not operate until that oil drains and the freezer is allowed to return to its normal status.

This isn’t necessarily a negative thing.  The compressor not starting or operating for long can prevent damage.  If it runs for too long without the appropriate level of oil, it can cause damage and could require repair or total replacement of the compressor.

So, if you plugged it in and it shut-off right away or never started completely, you may be in luck.

Unplug the freezer and let it settle for 24-48 hours.  Hopefully, this will allow the oil to drain from the cooling tubes and allow everything else to settle that may not have gotten a chance to.

After the allowed time passes, you’ll need to conduct another operational test, which involves plugging it in and listening for operation.  Also, you’re going to check to see if it’s getting cold.

If you’re still not getting a healthy start or if it runs but fails to get cold, you probably need to get the compressor inspected.  You should contact a technician at this point.

If you allowed the freezer to settle after a move and it still won’t start, you’re probably dealing with an electrical issue.

You already covered the power issue before while troubleshooting the compressor after plugging the freezer in right away after a move.  Again, check the outlet and the circuit breaker.  Bad outlets and breakers can always be replaced.

Before replacing anything, though, try plugging the freezer into a different outlet.  If you’re still not getting power, you’re now probably dealing with an internal electrical issue, probably related to a bad relay or switch, but it could also be a bad control board or thermostat, etc.

Unless you’re good at troubleshooting electrical issues with internal components, you should call a technician to run diagnostic tests.

If your freezer was allowed twenty-four hours to settle and has power to it but still doesn’t work, you could be dealing with a whole host of issues.  Again, it’s probably either a compressor or an electrical issue that’ll need to be checked out by a technician.

But what if it was shipped on its back?

Besides the tips already covered, there isn’t much else you can do other than call for help.  The reason being that, because it was shipped on its back, several things could have been damaged during transport.  It doesn’t necessarily have to just be a compressor problem or an internal electrical issue.

You can let it rest longer.  Maybe another twenty-four hours.  But it might not matter, at this point, how long you let it settle if it was shipped on its back.  More than one component vital to the operation of the freezer was probably damaged during the move.

Essentially, you could fix or replace one component only to still have to deal with damage to another.  Again, this is where you should call a technician for help in determining the problem(s).

When it comes to moving a freezer, it’s best to know what you should do ahead of time to prevent damage to the freezer and its internal components.  This is why you should always consult your owner’s manual or manufacturer’s website for information and recommendations for care and protection of the freezer during a move.

However, sometimes it takes experience to learn some lessons.  Hopefully, if your freezer isn’t working after a move, simply unplugging it and letting it settle for a good amount of time will solve the problem.  If not, help is usually just a phone call away. 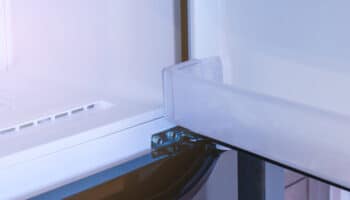 Is your freezer constantly triggering your circuit breaker? Our guide will help you pinpoint what’s causing the problem. We’ll start with the easiest fixes before looking at more difficult or expensive issues.

Freezer Cold But Refrigerator Warm? Here’s How To Fix It

Are you frustrated because the freezer is cold but the refrigerator is warm? If so, take a look at a few steps to follow to fix the issue. 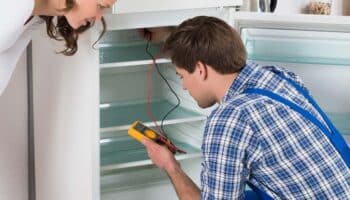 Convert A Freezer Into A Refrigerator In 4 Simple Steps

Do you want to convert your freezer into a refrigerator? Use these 4 steps to get a second fridge in your home today. 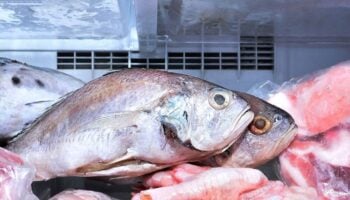 Freezer Smelling of Fish? Here’s How To Freshen It Up

Does your freezer smell like fish? These 6 steps will help you get a fresh smelling freezer again like the day you bought it.