If you’re new to the cordless tool game, you’re probably imagining what project to tackle first with your new drill or saw (or, if you’re lucky, both).  Maybe it’s some other tool.  The point is, with cordless brands like DeWalt come common batteries that can be used across a wide range of tools.

In simple terms:  you’ve got a whole lot of choices ahead of you.

But first, you need to know what those LED lights mean on your charger.  Remember that charger keeps your batteries humming.  And with that charger comes LED indicators that tell you exactly how your battery’s doing (i.e., is it charged, charging, too hot/cold, or possibly defective).

It’s good to know what those indicators mean before getting to work.  Even if you’re an old salt at the cordless tool game, not every brand has the same indicators, colors, or meanings.

With all that said, if you’re new to the cordless world or just new to the DeWalt brand of cordless tools, let’s take a look at the DeWalt charger at what its LEDs are trying to tell you about your equipment.

Contents show
1 1. Different DeWalt Chargers May Have Different Colors
2 2. If You Don’t have the DeWalt Manufacturer’s Manual
3 3. So, What Do those LEDs Mean Already
4 4. YELLOW LED and Temperature Delays for DeWalt Batteries
5 5. Is that True for All DeWalt Chargers?
6 6. DeWalt Battery Electronic Protection System
7 7. Is Something Defective with Your DeWalt Charger or Battery?
8 8. DeWalt Charger Blinking Fast
9 Conclusion

Yes, just because you’ve settled on a single brand for your cordless tool needs, it doesn’t mean all of that brand’s chargers have the exact same indicating LEDs.

Don’t blame DeWalt.  As times change, so does technology and, with things like customer feedback, so do indicators.  If it makes you feel any better, the changes are usually done as a response to confusion caused by older models.  In other words, the goal is to make things simpler and easier to understand.

This is why it’s important to keep the owner’s manual that came with your specific charger.  It should have all the guidance you need, including operating instruction, trouble shooting recommendations, and the proverbial meaning of those LEDs.

It’ll look something like this, but made specifically for your model.  In this case, we’re using the manual for charger model DCB115.

Now be careful relying on some sites that don’t specifically cite the manufacturer or model number they’re using for examples.  It’s easy to confuse various chargers and lights, not just among different brands but within the same brand.

Also, as a quick aside, most modern chargers will charge both Lithium Ion and Nickel-Cadmium types of batteries, including DeWalt models.

2.  If You Don’t have the DeWalt Manufacturer’s Manual

If you don’t have the DeWalt manual that came with your charger, you can usually find it on the internet with a quick search using something like “DeWalt Battery Charger [Model Number] PDF manual” as a search term.

Again, it should look something like this.  If you notice in this example, it has the meaning of the indicator LEDs on page 2.

3.  So, What Do those LEDs Mean Already

Continuing to use this manual as an example, a flashing RED light means the battery is charging.  That’s a very good sign.

So, to make this summary even quicker, here are all of the big ones:

Okay, so far, you should only be dealing with RED LEDs, whether they’re flashing RED for charging or solid RED for fully charged.  Is there any other LEDs?

Okay, here’s something really good to know.  If your battery is either too hot or too cold, the charger will not be able to charge it until the battery reaches a normal charging temperature.

How will you know if the battery is too hot or cold?

With a specific LED, of course.  Well, actually, it’s a combination of LEDs.

You see, some of the DeWalt chargers come with two LEDs that are side-by-side, as is the case of the manual referenced so far.

When the battery’s charging or completed charging, only one LED will be illuminated.

If, however, there’s a temperature problem, you should get a flashing RED but right next to it a solid YELLOW.

Once the battery reaches a safe charging temperature, the YELLOW light will extinguish and the flashing RED will indicate normal charging in progress.  It should be noted, too, that a cold battery pack will charger slower than a warm one.

5.  Is that True for All DeWalt Chargers?

Again, not all DeWalt battery chargers have the same indicator LEDs.  And again, like other brands, times and technologies change, improvements are made, and sometimes, so do lights and what they indicate.

If you have a charger that doesn’t have a YELLOW LED, and if there’s a temperature delay with the battery, you should see a solid RED light alternate with a rapid RED blink.  Once the battery reaches a safe temperature, it will do the same as the other charger and resume charging with a flashing RED light.

DeWalt lithium ion batteries have a built-in electronic protection system that is designed to protect your equipment from damage by turning the battery off.

When does it do this?

If an overloaded, overheated, or deeply discharged condition is sensed.  If any of these occur, you will not be able to reset the battery and move on.  Instead, you’ll have to remove the battery and place it on the charger.

This makes sense for a battery that’s too deeply discharged.  And you already know an overheated battery needs to cool down before charging.  If you have a condition where the load was too much, everything needs a rest.

So, in a way, the electronic protection system is kind of a big time out for you, your battery, and your equipment.

7.  Is Something Defective with Your DeWalt Charger or Battery?

When it comes to issues with chargers or batteries, one of the number one issues is a defect on one side or the other.  The types of defects are wide ranging.  If you have one, it could be anything from a dirty or rusty contact to poor voltage from the outlet to plain old damaged equipment.

But you’re not worried about what the defect might be, right now.  You just want to know if the charger will let you know if there’s a defect in the first place, right?

Using the manual cited so far, a defect will be indicated by the fact there’s no LEDs illuminated.

Now you might ask, “Well, what if the charger isn’t getting power?”

Ah, yes.  Good point.  To make sure it isn’t a power issue, plug the charger into a different outlet and see if any RED LEDs light up (solid or flashing).  If they do, you need to troubleshoot that first outlet now.  If you’ve got no LED, you’ve got a battery issue.

The manual also notes it could be a charger issue.

So, how do you tell if it’s a charger issue?

If, however, the second battery indicates it’s charging or charged, you need to dispose of the bad battery and replace it.

If the charger is the issue, it’s recommended you take it in for service or replacement.

So, the models noted above will indicate a defect by not illuminating any LEDs.  That’s not the case for others.  For models DCB101, 102, and 103, you will get an LED in the form of a rapidly blinking light.

It’s not a flashing light.  Think more like it’s blinking like its life depended on it.  An LED version of hyperventilating.

To determine if it’s a defective charger or battery, though, you can do the same steps as outlined above.

Cordless handheld tools provide convenience and freedom while also saving time when it comes to work preparation and logistics that can’t be matched by corded handheld tools.

That being said, the batteries used don’t have a limitless charge.  Nor is there a way to charge them while in operation.

No, with cordless tools like those manufactured by DeWalt come batteries and battery chargers.  And those chargers have LEDs and manuals that tell you very specifically what the status of your battery is, if there are any problems, and what needs to be done about them.

With that in mind, there should be no major barriers to all the work you can now get done with your DeWalt cordless tools.

Cordless tools are game changers. However, all the LED lights on the batteries and chargers can be confusing at times. If you’ve got a Ryobi Charger and you’re wondering why it’s flashing green, let’s take a look at what that means and what you should do about it. 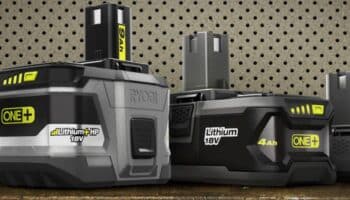