Yellow Liquid Leaking From Your Fridge? Here’s What & Why

“What is that?” you ask yourself as you discover yellow liquid leaking from your fridge.

“Seriously, what is that?”

Well, it’s a yellow liquid.  Probably somewhere around the bottom of your fridge or on the floor.  Maybe even some in the bottom, inside the fridge.

The best question to ask is why it’s leaking from your refrigerator?  Yellow liquid leaking from a fridge is far from common.

The good news (yes, good news) is there is probably an easy answer.

However, we’ll explore several possible answers and what you can do to eliminate what probably looks pretty disgusting.  Nobody likes the words “disgusting” and “my refrigerator” used in tandem.

Below, we’ll address the issue and some possible solutions.

We could say, “let’s dive in!” but let’s avoid saying that with yellow fluid.

The first place you can check to see where the yellow liquid is coming from is the defrost drain pan under the fridge.  It’s one of the most common areas to check for any water leaking from a fridge and usually the easiest to inspect first.

The drain pan is meant to collect water draining from the freezer during the defrost cycle.  Once in the pan, the water should evaporate.  However, if there is a lot of dirt, debris, mold, or dead bugs in the pan, it can start to affect the evaporation process poorly.

Basically, too much foreign debris takes up the space normal drain water would.  This causes the incoming water to back up and eventually overflow.  Choosing the path of least resistance, this water almost always ends up on the floor.

Now you may be asking, “Why would the water be yellow?”

That’s where the inspection comes in.  If your drain pan does have debris that needs to be cleaned out, well, you’ve solved one problem, i.e., where the liquid is coming from.

But if the water is yellow when you inspect it, that’s probably a result of all that crud decomposing and mixing with the water, creating a yellow slurry.

Of course, the fix here is to give the drip pan a really tough cleaning and scrubbing.  It won’t be a fun thing to do.  And you can expect some foul smell possibly.  If you’ve ever had to clean a drain for a sink, you understand how rancid that smell can be.

Say you pull the drain pan out for inspection and it’s clean except for yellow residue, but nothing super nasty.  Another thing you can do is to check and make sure the refrigerator is level.  An unleveled refrigerator may cause the drain pan to fill unevenly.

If it’s filling unevenly but seems mostly okay, water may be pooling more to one side of the pan than the other.  Where the yellow residue is probably where the pan is tilted due to being unlevel.  When it fills, the water rushes to that side and overflows in that direction.

To test this hypothesis, correct any unlevelness with the fridge.  If you don’t get any more yellow fluid leaking on the floor, you know the drain pan is doing its job and allowing the water to now evaporate efficiently.

Now you have another question to answer.  Where did the yellow residue come from?

Water from the defrost cycle drains to the pan through a defrost drain pipe.  But like the drain pan, the drain pipe can also accumulate foreign debris like mold and all kinds of other nastiness.  Remember, where there’s moisture and a drain, there can build-up of stuff you don’t want to see every day.  This goes for any plumbing drain.

That being said, if the drain is in the process of clogging, the first indication would be in the drain pan.  If it becomes clogged or almost completely clogged, the water will start to back-up into the refrigerator proper.

Maybe you were lucky and caught it by examining the pan and it hasn’t backed up into the fridge.  If you’re unlucky and you’ve already discovered yellow fluid in the interior of the fridge (probably in the form of very thin yellow ice under the bottom drawers of the fridge), you definitely have a clogged drain already.  In either case, you want to correct the clog before it gets any worse (or disgusting).

To clear the clog, use hot water to flush it.  Avoid using boiling water.  You don’t want to possibly trap boiling water in the pipe while the clog is still there as it may damage the PVC.

Continue to flush until the drain line is clear and you should be good to go.

This is an interesting one to consider and might not be noticeable if the refrigerator is cold.  The main thing to consider here is the yellow fluid.

Let’s say you discovered the yellow fluid after being out of town.  While gone, you find out there was a power outage where the refrigerator completely defrosted.  And let’s say, upon coming home you find the fridge has a lot of defrosted water collected at the bottom of it or the pan or both.

And it’s not just yellow.  It’s YELLOW.  Like radioactive yellow.

Now the water being everywhere due to a forced and unexpected defrosting due to a power outage isn’t surprising.

But why is it radioactive?

This could be due to a small leak in the refrigerant that may have gone unnoticed.  The refrigerant is a gas, not a liquid, but because it’s heavier than air, and if there is a leak, it could settle to the lowest point in the refrigerator where it can mix with the water.

Okay, but why would the water turn that yellow?

Often, gases have a chemical added to them to help detect leaks.  If you smell natural gas, you’re actually not smelling natural gas.  Natural gas is odorless.  So a chemical is added to it to give it a smell so you can detect it.

For stuff like refrigerant, which is invisible and odorless, a type of dye can be added for leak detection purposes. That radioactive yellow could be an indication you have a refrigerant leak.

The solution here is simple: call a technician to have your refrigerator officially tested.  Hopefully, though, this is a worse case scenario.

And it’s highly unlikely.  Just be aware that yellow that bright is usually not related to something rotting in your defrost drain line or drain pan.  If you have that crazy yellow of a color coming from those locations, you really have to consider what kind of thing has decided to take up residence in your fridge.

Although discovering yellow liquid coming from your refrigerator can be unnerving (and disgusting), there are several ways to discover why it’s coming from your refrigerator and what you can do to discover the source and how to correct it.  Hopefully, the reason is not too disgusting and the fix easy and can be solved quickly without the need to call in a technician.

Is your refrigerator always icing over? You might have to tweak some settings. Here's how to solve this problem in 5 easy and quick steps.

Seeing A Red Button In Your Fridge? Here’s What It Does

Are you stuck trying to figure out what the red button on your fridge does? You're not alone. Read this quick guide to find out! 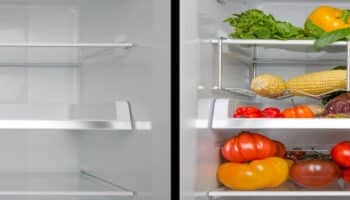 Solving A Red Warning Light On A Refrigerator: 6 Steps

Is your fridge showing a red warning light? Don't worry, read this quick guide to learn how to get rid of it. 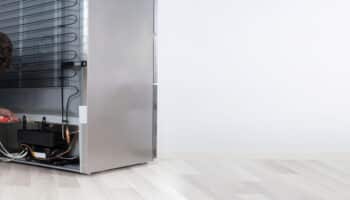 Do You Smell Or Hear Gas From Your Fridge? Read This

Do you smell or hear gas from your fridge? You might have a Freon leak. Read this quick guide to learn how to solve the issue.