Dryer Leaking Water Instead Of Drying It? Here’s Why

A dryer is supposed to dry laundry after washing. But you may have noticed your dryer leaking water, and you aren’t sure of the cause.

Don’t worry, you’re not alone. It’s not uncommon for dryers to leak water – but thankfully some common fixes can help solve the problem for you.

Below are 8 reasons why your dryer may be leaking water, and some possible fixes.

8 Reasons Why Your Dryer Is Leaking Water

In most instances, you can blame a leaking dryer on a blocked ventilation system.

Here’s how the dryers work: The appliance uses electricity to heat air using the heating elements inside the drum. The hot air is distributed evenly over the drum using fans to dry the clothes. Once the hot air passes over the clothes, it carries moisture in the form of water vapor and some trace amount of lint before exiting through the exhaust system.

If the ventilation hose exiting the dryer is blocked, the water vapor may have no escape and end up condensing inside the dryer, and once that happens for a long time, you will begin to see water leaking from the dryer.

Ensure that no kinks are blocking the passage of the air through the vent. You should also check whether your dryer has a link screen over the ventilation hose because it may be clogged with lint if you haven’t cleaned it in a while.

The hot air passing over the drum heats the moisture and collects it in water vapor. Some lint may also be collected, and the mixture exits through the exhaust system. However, there may be factors preventing the smooth exit of these materials, and they end up staying too long inside the vent. The water vapor condenses and, together with the lint, forms clumps or forms a gooey mixture that settles inside the hose and ends up causing more blockages. You should inspect the ventilation systems by placing your hand next to the vent to feel the amount of airflow exiting the appliance. If you got a small amount with low pressure, the duct is blocked.

You can solve the problem by cleaning the ventilation hose. Begin with disconnecting the dyer from the power source to avoid the danger of electrocution. Disconnect from the dryer and clean with a cleaning kit or a vacuum extension to remove the sticky mixture and allow free flow of air. You can purchase either of these cleaning items from a local hardware store. Replace the ventilation hose and ensure that it’s straight without any twists that would prevent smooth airflow.

Remember that the exhaust hose opens to the outside, where it lets the lint vapor mixture escape. However, it is not always open on the outside because some foreign bodies can enter the dryer and cause blockage. Therefore, a ventilation flap is usually installed to keep leaves, rodents, snow, rain, and other outside elements from entering the dryer from the outside.

The flapper is usually soft and flexible in letting out the water vapor and returning to position to prevent entry from the outside. Sometimes the flap may become too rigid and inflexible or stuck, preventing the vapor from exiting the exhaust hose. The water vapor will stay for too long inside the hose, which is not as warm as the drum was, and the drop in temperature will cause condensation, and the slurry will settle inside the vent, causing a blockage.

You should check the outside hose to make sure that it’s okay. Inspect the flap to ensure that it’s functioning correctly and order a replacement if it’s defective. You can also remove any foreign body that is making the flap get stuck.

Issues with the Condenser

Most of the older dryer versions use a ventilation hose that empties the hot air to the outside. What if you don’t have sufficient space to use an exhaust vent because the space is limited? Some ingenious mind came up with the idea of condensing the water vapor right inside the dryer and collecting the water in a small tank for later emptying. If you have such a dryer and it is leaking water, you should check the condensation system.

Typically, your dryer will produce a certain amount of lint depending on the load, say, fleece and new towels. Unfortunately, you cannot avoid the lint getting into the wrong areas-even in the condensation system. Excess accumulation of fluff can cause blockages and backflowing.

Begin with powering off the machine and unplugging from the power source. Ensure that you are not standing in a puddle of water. First, check the filters inside the condenser if accessible as stipulated inside the user manual. Next, check whether the condenser tank is overflowing or leaking, followed by the condensate pump and the piping to ensure no damage. If you find that the condensation pump is faulty, you can replace it with a new one if the current one cannot be fixed.

Also, check the piping between the condensation pump and tank for holes and blockages that may contribute to the tank’s overflowing. You should also ensure that the condensation tank is standing upright and not tilted, or water will flow inside the dryer, causing lots of damage. You should adjust the dryer’s front feet to create a slight backward tilt that allows the water to trickle inside the collection tank.

Let’s talk about the configuration of the exhaust vent if you want to avoid water flowing back to your precious dryer. To guard against condensation problems, it should be straight and run horizontally without any twists and bends as far as possible. Some people didn’t have a dryer in mind when building a home. The result is a ventilation duct with too many twists and turns as they try to navigate the vapor out of the house.

Too many turns and twists provide an easy surface for lint collection, which, together with the condensed water, may cause blockage. Although different manufacturers have various specifications for their brands, a typical exhaust vent should reach 25 feet maximum length with bends included. Any elbows installed on the pipe should be included when calculating the overall size of the duct. For example, a 45-degree turn makes 2.5 feet while a 90-degree elbow makes 5 feet when calculating the total length of the pipe.

If that length cannot be achieved, the only solution is drilling a hole at the bottom of the pipe just where it leaves the laundry room wall and installing a drainage system to catch the water.

However, it would be best to never let the humid, warm air escape inside the home. A home’s humidity level is usually 68F, and anything more than that encourages the growth of mold, mildew, and other fungi on your furniture, clothing, walls, floors, and ceiling boards. This is terrible news because it may cause worsening respiratory allergies.

The Material of the Ventilation Duct

A strong, inflexible metal duct, aluminum, or galvanized steel is recommended for the hidden part of the dryer’s exhaust vent. Experts advise against using PVC pipes or plastic hoses for the ventilation ducts because they are highly flammable and will catch fire if the lint trapped inside ignites. You can use a tinfoil coated exhaust vent for short distances up to 8 feet, after which you should install a rigid metal pipe. Ribbed duct piping should be avoided at all costs because it provides more surface area for trapping lint.

Lack of insulation in exhaust pipes may cause condensation and the subsequent leaking of water from the dryer. For a full load of laundry, your dryer will usually vent up to three gallons of water, and you can imagine some of that water condensing inside the dryer. This phenomenon is generally common during winter or if you live in colder climates. Pipes that pass through unheated areas such as the basement and the attic are also prone to condensation because the cold air affects the tube, which cools down the water vapor passing inside, causing blockage and backflow.

You can prevent ice from forming during winter by insulating the pipes. Alternatively, you can heat those areas where the lines are located to at least room temperature to ensure that the vapor inside the pipe is not exposed to freezing temperature. You should consult an expert on further insulating the vent or the walls next to the vents.

However strong the vent is, time will finally take its toll, and you will begin to see signs of wear and tear on the ducts. They may also be damaged during installations or renovation, which may cause holes or cracks. Sometimes, this may not be very obvious, especially if the holes are not located in a hidden area. If the holes go undetected, they may let in cold air that condenses the hot vapor before it has time to exit the vent. This will cause a backflow, and when it has accumulated enough inside the dryer, it will start leaking.

You should regularly inspect the vent for any signs of damage and get the holes fixed to prevent the entry of cold air. Alternatively, you can buy and install new piping.

It’s usually expected that small amounts of water will accumulate inside the dryer, but you will not see it leaking. The door is made such that it fits perfectly to prevent any exit of water vapor or entry of cold air. If the door seals are damaged, you will see water flowing through the spaces. You should get an HVAC expert to troubleshoot and fix the issue.

A dryer doesn’t have inlet pipes like a washing machine, and if you see a dryer leaking water, then you can blame the issue on the exhaust system.

Water vapor and some amount of lint leave the dryer in the form of steam, and problems with the exhaust system cause condensation, subsequent backflow, and leaking of water from the dryer. 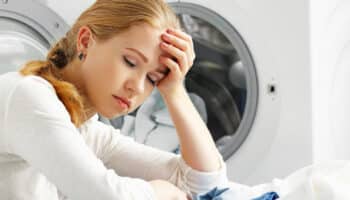 Why Your Dryer Keeps Clicking, & What To Do About It

Got a dryer that keeps clicking? Don't worry, you're not alone. Here's 9 reasons why your dryer is clicking, and how to fix each one today. 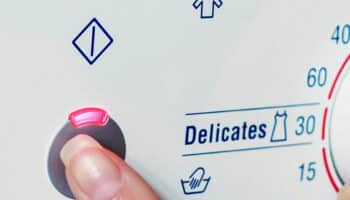 Why Your Dryer Shuts Off After A Few Minutes: With Fixes

Wondering why your dryer keeps turning off after several minutes? Find out why and what to do about it right here. 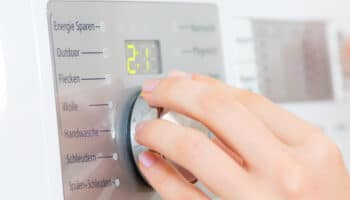 Is the Control Lock on your Whirlpool dryer stuck? This article covers the easy fixes as well as in-depth solutions to this problem. 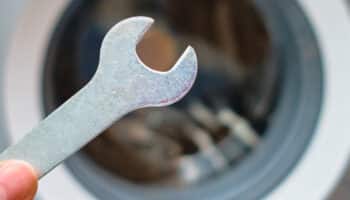 Dryer Refusing To Cool Down After Finishing? Here’s Why