Can A Dehumidifier Be Used As An Air Conditioner? Sort Of!

To this day, a lot of people still struggle to tell between an air conditioner and a dehumidifier.

And who can blame them?

I mean, think about it, both appliances remove moisture from the air, are equipped with fans, and provide a cooling sensation. I’m actually more surprised by the people who can identify each one without previous technical training.

In this article, I’ll do my best to explain how each appliance works, and why a dehumidifier can cool the air, but might not be the best solution for hot days.

Below, you will find useful information to answer all the questions you may have surrounding these two machines. I’m certain that, by the end of it, you will have a much clearer understanding of the whole concept.

Are you ready? Let’s get to work!

These appliances go about dehumidifying by using a hot, and a cold coil, known as the evaporator, and the condensator, respectively. Dehumidifiers pull in the air from the environment with their fan, use their condensator coil to gather the excessive moisture, and then utilize the evaporator coil to remove it.

This ongoing process is how your appliance reduces the humidity percentage in your living spaces.

While these appliances operate very similarly to dehumidifiers, there’s one key difference between them. What they do with the processed air. Dehumidifiers simply remove excessive moisture from the air before releasing it back into the room. Whereas air conditioners send the hot air outside, and only recirculate cool air.

First, your air conditioner pulls in the surrounding air and passes it through a series of coils carrying refrigerant. This substance absorbs the heat in the pulled in air and transforms into gas, which is then blown to the outside world.

Once that process is complete, the appliance uses a compressor to turn the refrigerant back into liquid form, and the newly-cooled air is released back into the room.

What Does a Dehumidifier Do That an Air Conditioning Doesn’t?

Quite a lot, actually.

As stated above, they are different appliances designed to fulfill very different purposes. And while they might share certain common aspects, the degree at which they perform their processes differs greatly.

Let’s start with the most obvious aspect. While an air conditioner will dehumidify an area to a certain degree, it will never be as effective as a dehumidifier. And you can easily tell by looking at the water containers for both appliances.

While air conditioners only have what is called a drip tray,  dehumidifiers have an entire bucket, or reservoir, which is normally equipped with a pump to prevent overfilling. This goes to show you what is expected from each unit.

One will only need to collect droplets, while the other is prepared to fight a flood.

Moreover, dehumidifiers are not as power-hungry as air conditioners. Which means you’ll be paying lower electricity bills every month.

Can a Dehumidifier Cool a Room as Well as an Air Conditioner?

The short answer is no, but let me elaborate.

As we’ve established above, both appliances work somewhat similarly. They pull in the surrounding air, and pass it through a series of coils to condense and evaporate it. However, only of these machines disposes of the removed heat effectively.

Dehumidifiers are great for removing the excessive moisture in your living spaces, and they can, to a certain point, cool a room. But it’s important to remember that they merely recirculate the air.

Air conditioners, on the other hand, use their refrigerant to remove heat from the air, and blow it to the outside world, releasing only the cooled current back into the room.

This makes them much more effective at keeping an area cool, and dissipating the unwanted heat.

Now that we’ve analyzed the general aspects, it’s time to move on to specifics, and compare.

There’s a big price gap between these appliances

Just as it happens with any other household appliance, you can find both air conditioners and dehumidifiers at different price ranges. But even then, there’s a big difference between them.

If you’re not looking for any extra bells and whistles, you can find a good dehumidifier for about $250.

Unfortunately, when it comes to air conditioners, the price is much higher. A basic wall-mounted unit will cost you anywhere between $500-$1000. And there are models upwards of $5000 for extensive cooling requirements.

I bet dehumidifiers are sounding great so far, huh?

When considering buying a new appliance, it’s also important to take into account the collateral costs that it entails.

This means that you won’t only be paying a higher price for the latter, but also get expensive electricity bills by using it.

This is a tough one.

Again, since both appliances are designed to serve different purposes, this is like comparing apples and oranges.

If you ask me, dehumidifiers are the more versatile appliance. Not necessarily because they can do more things, but because they solve more problems.

An air conditioner will only make your room cooler. That’s it. Whereas, a dehumidifier will improve your health, and save you thousands of dollars in moisture damages.

If maintained properly, air conditioners can last for decades

This is where air conditioners start taking the lead.

According to most manufacturers, the average dehumidifier will last you anywhere between 5 and 10 years. Whereas, a standard air conditioner should have a useful life of 17 years on average.

If you think about it, given the price tag difference, it makes sense for the latter to last almost twice as long. That being said, it will be very difficult for an appliance to last as long as it should if you neglect it or maintain it improperly.

Which leads me to the next argument.

When it comes to cleaning and replacing internal components, such as air filters, dehumidifiers are much easier to access than air conditioners.

While the former will only need you to remove a plastic panel, you’ll need a ladder and some tools to clean and maintain the latter.

Whenever you’re about to purchase an appliance, it’s important to think about your personal habits, and how willing you are to give it regular maintenance.

Air conditioners might require you to call a professional

As stated above, it’s critical to consider not only an appliance’s price tag, but also the collateral costs that owning it will entail.

Most dehumidifiers are basically plug and use. Even when you get a model with pumps and a drain line, you normally don’t need a technician to install or set them up.

All you need to operate them correctly is your user manual, and some patience. Something that can’t be said about air conditioners.

Whether we’re talking about a wall-mounted unit, or any other model, it’s almost an absolute certainty that you’ll need a professional’s help to set up your machine.

Installing an air conditioner by yourself can be overwhelming, as there are so many wires, tubes, and exhausts that require connection.

When Do You Need an Air Conditioner and Not Just a Dehumidifier?

As discussed before, both appliances serve different purposes. If you live in an extremely hot area, and are in desperate need of cooling solutions, your best bet will be to get yourself an air conditioner.

That being said, owning a dehumidifier as well, is a good idea. In most cases, if your area is hot enough to require air conditioning, it’s likely also very humid. By running both appliances simultaneously, not only will you stay fresh, but also keep your surroundings free of damp and mold.

And, as a nice bonus, your electricity bills will be cheaper, since your air conditioner won’t have to work as hard to dehumidify the incoming air.

Getting confused by the differences between air conditioners and dehumidifiers is completely normal. After all, both appliances seem to work under the same principles.

However, as I hope you’ve learned in this piece, they’re actually very different, and serve specific purposes.

Before deciding which one you should go for, you should take a look at your personal habits and needs, as well as the climate conditions in your area.

Thank you so much for sticking with me all the way to the end. If you found this article helpful, why not keep the learning going through other incredible resources below? 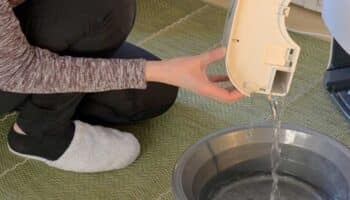 Is your dehumidifier not draining properly? When was the last time you cleaned the pumps? Here are 5 causes to this problem, and the fixes you can try. 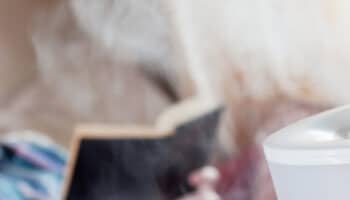 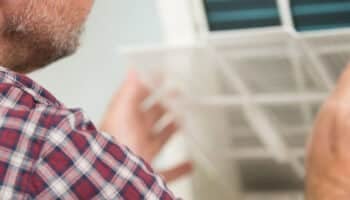 How to Fix A Dehumidifier That’s Freezing Up: 5 Steps

How can you fix a dehumidifier that keeps freezing up? You might want to start by looking at your coils. Here are five steps you can follow to fix the problem. 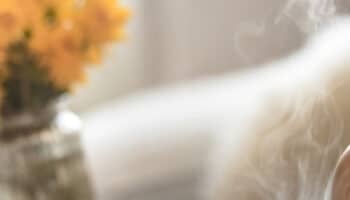