Fixing A Ceiling Fan Motor That Hums But Won’t Turn

Is your ceiling fan stuck humming, but the blades aren’t turning? This is actually a common problem for ceiling fans and it can have a variety of causes. If your fan is sitting there just humming, you want to get it fixed as soon as possible.

A broken ceiling fan can cost you a ton of money on energy bills. Your ceiling fan is still one of the best ways to lower your energy costs when it comes to heating or cooling your home. So, what causes the motor to hum?

The first step in fixing a ceiling fan that hums but won’t turn is to check your circuit breaker as well as the switch that controls the fan. After that, try manually rotating the blades and if they don’t spin, then you know you have a problem with the ball bearings. The last thing you can try is to open the fan’s housing and check to make sure nothing is burnt out or disconnected.

Let’s take a look at what you’re going to need to do to fix your ceiling fan.

Contents show
1 What You’ll Need to fix Your Ceiling Fan Motor
2 Step By Step Guide for Fixing A Ceiling Fan
2.1 Troubleshooting Your Fan’s Motor
2.2 Bad Switches
2.3 Check Your Circuit Breaker
2.4 Check The Direction Switch on Your Fan
2.5 Does Your Fan Have a Dimmer Switch?
2.6 Replacing a Dead Capacitor
2.7 Ball Bearing Problems
3 Wrapping Up This DIY Ceiling Fan Repair

What You’ll Need to fix Your Ceiling Fan Motor

You’re going to be surprised at how few tools you needed it to repair a ceiling fan motor. In most repairs, all you’re really going to need is a screwdriver and replacement parts. Ceiling fans are deceptively simple to work on and repair.

The only tricky thing to keep in mind here is that it will be working with electricity. You should always err on the side of caution and cut power to your ceiling fan when you work on it. This can most easily be done by flipping the circuit on your circuit breaker that controls the room that the fan is in.

Here’s a general guide for the supplies you’ll need to do the repairs and our walkthrough.

Step By Step Guide for Fixing A Ceiling Fan

Let’s start by doing some troubleshooting to find out why the fan isn’t spinning properly.

Before we can fix a fan motor, we need to  find out what’s causing the problem. Let’s walk through a few troubleshooting techniques that can point you in the right direction.

Those are the two things you should always check first. They will point you in the right direction when it comes to fixing a stuck fan motor.

Here’s where that multimeter is going to come in handy. The problem might not be with the fan itself, but with the switch that controls your fan. We’re going to test the switch to make sure that it’s able to work.

Here’s how you replace a switch.

Now let’s head into the basement, or the garage, to check your circuit breaker.

There is another switch that we’re going to look at, but this one’s on the fan itself.

Check The Direction Switch on Your Fan

If that switch is stuck in the middle, it could cause your fan to hum while the blades don’t rotate. Certain models of fan have switches that can get stuck in the middle which sends mixed signals to the fans motor. You should check the directional switch on your fan in order to avoid burning out the motor.

Now let’s take a look at how dimmer switches can control a ceiling fan motor.

Does Your Fan Have a Dimmer Switch?

It’s pretty rare to find a dimmer switch on your wall that can control your fan’s motor. In fact, dimmer switches on walls are designed almost exclusively for lighting and do not have enough power to control fan motors. However, some dimmer switches are wired into fan motors which can lead to problems controlling your fan.

If you have a dimmer switch connected to a ceiling fan, try cranking the dimmer switch to its maximum setting. This should deliver enough electricity for the fan’s motor to kick in and stop humming. However, this is only a temporary solution.

You should follow the instructions in our second tip to replace this dimmer switch with a proper switch for controlling your fan. There are specialty dimmer switches out there that are designed to control fan motors, but you need to make sure that you have one of these installed rather than a general light dimmer switch.

Dead capacitor is a common cause for a fan motor that hums but doesn’t spin.  You can tell if a capacitor is burnt out because it will often be visibly charred or cracked open. Here’s how you can quickly get your capacitor replaced.

Remember how we suggested attempting to manually spend your fan to see if there was a problem with the ball bearings? Well, if your fan resists spinning or makes a grinding noise when you manually move the blades around, then you’ve probably got some worn-out ball bearings.

Fixing your ball bearings is one of the most challenging repairs you can do on your fan. In fact, most people would recommend simply buying a new ceiling fan if the ball bearings are worn out. Certain models of ceiling fans have very difficult to repair ball bearings that might not be worth the struggle.

Here’s a general guide for replacing worn out ball bearings on a ceiling fan.

Just go through these eight quick steps and your fan’s motor will be back up and running in no time. There’s a good chance that your fan was just having some simple electrical problems or just needed a replacement capacitor.

Let us know which of these solutions worked for you and check out our other DIY repair articles below. 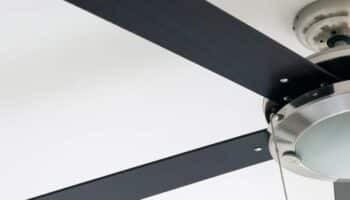 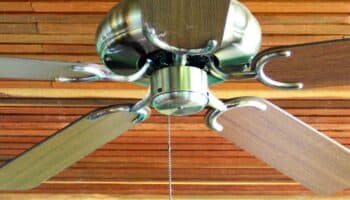 Ceiling Fan Running Slowly? Speed It Up In 6 Steps

Is your ceiling fan running slowly? When was the last time you cleaned the bearing? Here's how you can speed it up in 6 steps. 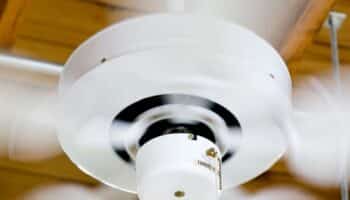 Ceiling Fan Going Too Fast? Slow It Down In 5 Steps

Is your ceiling fan going too fast? Your blades might be imbalanced. Here's how to slow it down in 5 steps.