Got a Bird Stuck in a Garage? Help Get It Flying to Freedom

Has a trapped bird in your garage got you in a flap? Then take a look at the tips in this article that will help you set it free.

To free a bird stuck in your garage do the following:

Getting a bird out of a garage will take a generous helping of patience and some innovative ideas. In this article, you’ll find the instructions you need. They will help you have success with the methods listed above. Make sure you check them out!

Contents show
1 Got a Bird Stuck in a Garage? Help It Fly to Freedom
1.1 Open the Windows and Doors
1.2 Turn off the Lights
1.3 Use Bright Objects
1.4 Leave Food and Water
1.5 Install a Fake Owl
1.6 Catch the Bird
2 How Long Will a Trapped Bird Live?
3 How to Prevent Birds From Entering the Garage
4 Conclusion

Got a Bird Stuck in a Garage? Help It Fly to Freedom

How long will it take for you to get a bird out of the garage? – Well, how long is a piece of string?

Does the bird that’s stuck in your garage seem to be oblivious to the door you’ve left wide open all afternoon? Does all the shooing you’ve been doing seem to entertain it and make it stick around longer rather than startle and entice it to leave?

Getting a bird out of the garage may not be as easy a task as you had originally imagined. But before you pick up the phone to call animal patrol, try some of the following methods.

Open the Windows and Doors

Although it may not look like it, the bird that’s stuck in your garage is probably keen to leave. Imagine, it’s swapped its beautiful natural habit to be caught up in a poorly lit garage. It’s stuck between the rake and a lawnmower instead of flittering between the hedges and trees.

So what’s putting it off leaving? Most birds are frightened by humans. Have you been dancing around, shooing, and trying to coax the bird out of the garage for the better part of the day? Then by now, the poor bird is no doubt literally scared stiff.

So what can you do to make it leave? Try the following:

Turn off the Lights

Except for owls, night-herons, and night-hawks, most birds are diurnal. Like us, they sleep during the night and are most active during the day. Creating a night environment for a bird might be a useful trick for you to free a bird from your garage.

Has the bird stuck in your garage failed to respond to the first two methods? Then one of the following things must be true:

Either way, the bird has got to skedaddle. So, here is another gentle method that should encourage the bird to make a move:

The bird may have entered your garage in search of food and water. What’s one way to get it to leave? Giving it what it came for! Here’s how:

A fake owl decoy is a great way of getting a bird out of a garage. Most birds view owls as a predator, so they try to do all they can to get away from the decoy. Here’s what you can do to put the decoy into place.

Have you tried all the methods mentioned in this article but the bird still won’t budge? Then your only option may be to catch the bird and then set it free.

Now I know what you’re thinking. Catch a bird? Wouldn’t it just be easier to let the bird take over the garage and build a new one? Before you throw in the towel, take a look at the steps below. They will show you one of the best methods for catching a trapped bird.

How Long Will a Trapped Bird Live?

Is there a bird trapped somewhere around the vicinity of your home? Birds often get themselves caught up in awkward places such as:

When a bird is stuck in a tight spot, it may take a while for you to be able to reach it and help. So there arises the question, how long will a trapped bird live?

So, if you suspect a bird is trapped in a hard to reach area of the house, you should try to save it immediately. Call a professional if the bird has gotten stuck in an area that you will not be able to free him from on your own.

How to Prevent Birds From Entering the Garage

It is far easier for you to prevent a bird from entering the garage than it is to remove one. So, here are a few things that you can do to stop birds from trying to make a home out of your garage: 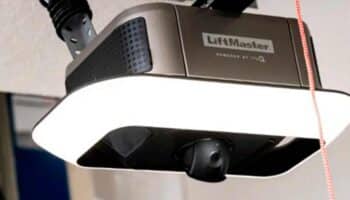 All 5 Reasons Why Your Garage Opener Light Stays On

Does your garage opener light stay on for what seems to be no apparent reason? Then you’ll find 5 reasons why it does this and how to turn it off in this article. 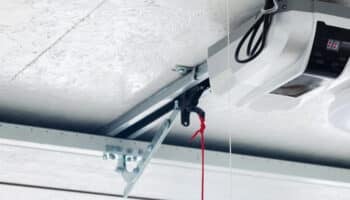 Aladdin Connect vs MyQ – Which Garage Door Opener Is Best?

There a lot of choices when it comes to smart garage door openers, but what about two of the big ones? Read to find out the difference between the MyQ and Aladdin Connect. 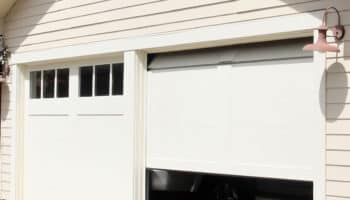 Are you struggling to get your garage door to close and are the lights constantly blinking? Then we have 3 speedy steps in this article that will help you! 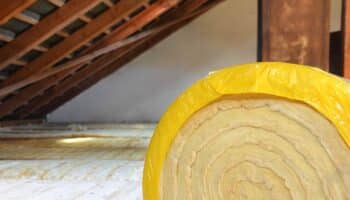 Need to insulate your garage, but wondering about the costs? We've created a calculator to estimate insulation costs for any garage.