How Much Do Microwaves Weigh? Averages from 54 Models

Ever wondered how much a microwave weighs?

Not roughly. But exactly?

Well – welcome to the holy grail of microwave weights.

I’ve asked myself this question, and dove into some research to find out. I collated data from 54 different microwave models, including:

So what’s the short answer?

A microwave weighs approximately 55lbs on average. This varies depending on size and type – from a minimum of 20lb (small countertop microwaves) up to 100lb (bulky built-in microwaves).

Want more detail about each microwave type? Then read on for a rollercoaster journey of microwave data!

How Much Does A Countertop Microwave Weigh?

Let’s start with the most common type and build upwards.

Here’s the stats for the 20 Countertop Microwaves – with Internal Size (in cubic feet) charted against Weight (lbs). 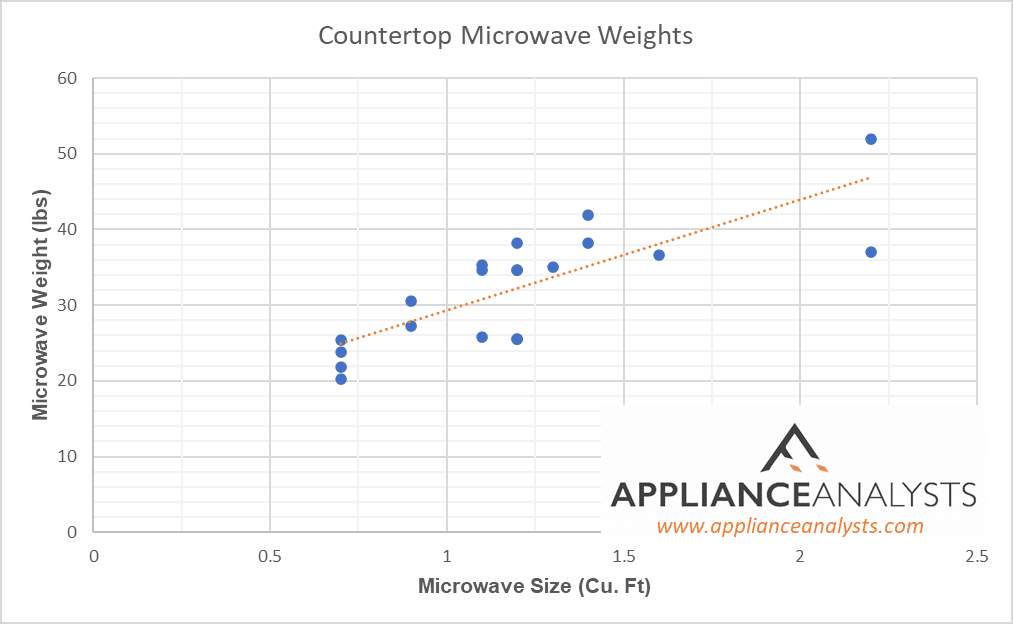 As you can see, the weight of a countertop microwave varies between 23-45lbs – with the average clocking in around 32lbs. This is by far the lightest of all types, and reflects their portability (and often cheaper pricing).

How Much Does an Over The Range Microwave Weigh?

Moving on to the second most common type, over the range microwaves can get away with carrying much more weight since they’re not portable.

However, they’re second lightest considering the bearing capacity of most ranges. 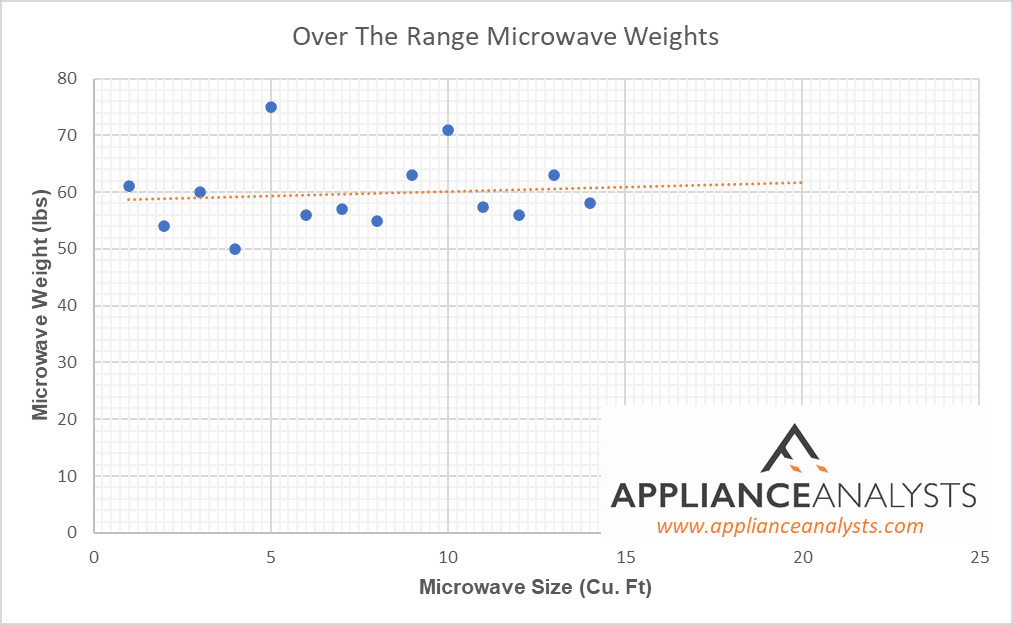 From this dataset, over the range microwaves weigh between 54lbs to 71lbs – with the average clocking in at an even 60lbs.

The curious point here is the lack of change in the graph. It seems that no matter the microwave size, the weight is almost always close to 60lbs. Especially compared to countertop microwaves.

This may be due to limitations expressed by the ranges themselves – or, alternatively, that manufacturers aren’t being detailed in their weight quotations. (For validation, I’ve included links to all these models and weights in the raw data).

Regardless, if you’re planning to install an over the range microwave you can sleep safe in the knowledge that it will be approximately 60lbs!

How Much Does A Built-In Microwave Weigh?

Built-in microwaves are a tricky one to measure. Mostly because they often come as a dynamic duo (with an oven) or they come with a lot of structural components to install it with.

That said, manufacturers do report the overall microwave weight – which is what is illustrated in the graph below: 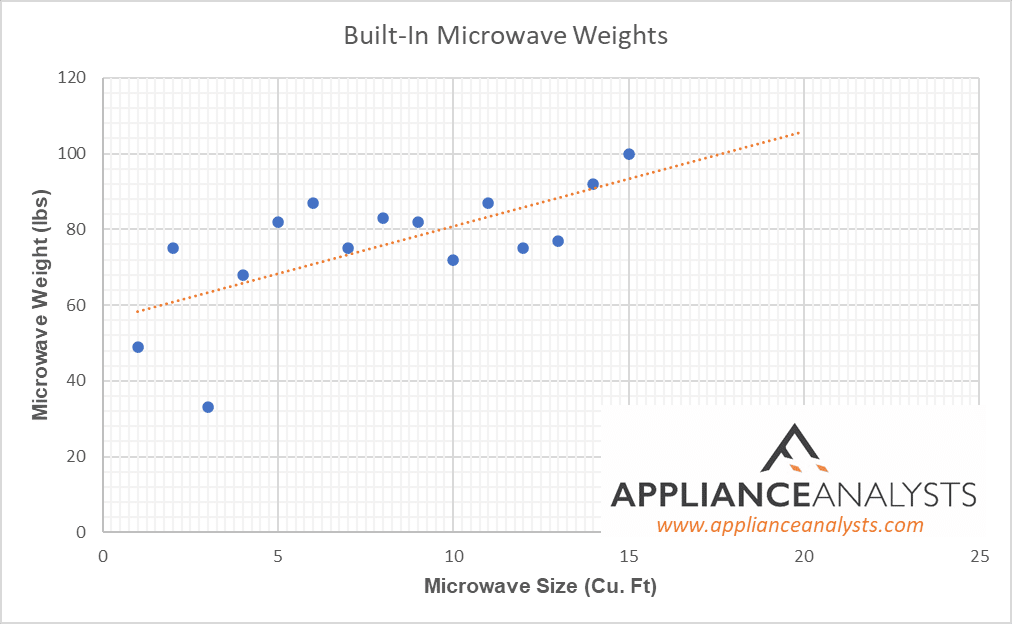 From the data, built-in microwaves have the largest range – weighing between 33lbs up to 84lbs, with an averaging of 76lbs. We’re getting heavier here thanks to the increased structural capacity of cabinets (versus ranges).

Curiously there’s an extreme outlier here. Apparently the 2.2cubic-foot sized built-in microwave by Frigidaire (link in table below) weighs just 49lbs! I’d like to ask them which scales they used for that.

Regardless, built-in microwaves are clearly quite heavy, and are approaching the limit of how much one person should be looking to lift and install.

How Much Do Drawer Microwaves Weigh?

Ah, at last. On to my favorite type of microwave.

If you don’t know what drawer microwaves are, you need to check out our review of them. In short they are the most advanced, ludicrously expensive microwave – but a type that’s worth the money.

Drawer microwaves are installed below your countertop, and the whole “drawer” of the microwave extends out. This means you can bend down and place your plate within the large drawer – no awkwardness of trying to squeeze it in, and super easy to lift heavy plates.

They’re perfect for elders, shorter people, or anyone who just loves convenience.

There’s so few drawer microwaves available that it didn’t make sense to present a graph. In addition, they’re all made by the same manufacturer (SHARP), and so all have the same drawer size (1.2 cubic feet).

However, we can still see that drawer microwaves weigh between 71lbs and 86lbs – with an average of 79lbs. The heaviest of the bunch for good reason – if you’re paying $1,000+ for a microwave, you’re going to want all the tech, all the power, and all the functionality. Which doesn’t come lightly.

Are there seriously FAQ’s about the weight of microwaves?

Well, as it turns out, yes? There are people searching everything on the internet these days – and just in case you’re one of those outliers, I’ve covered some of the related questions below.

How much did the first microwave weigh?

The first microwave weighed approximately 750lbs. It was as large as a refrigerator, and so inefficient it needed to be water cooled. It took around 10 years before they managed to reduce it in size enough to be sold as a domestic appliance.

When was the microwave invented?

Microwaves were invented in 1945 (that’s right, not a single person in the Second World War had even heard of a microwave!). The creator was an radar engineer – Percy Spencer – who discovered that the radar equipment could melt food.

I hope this incredibly specific guide has helped answer any questions you had on microwave weight.

If you have any questions, please just shoot me an e-mail.

Or even just to say that you’ve read this post. Though I probably won’t believe you.

Now I’m away to question my own sanity and have a beer. Did I really write a post on microwave weights? Did you really just read it?

What a world we’re living in. 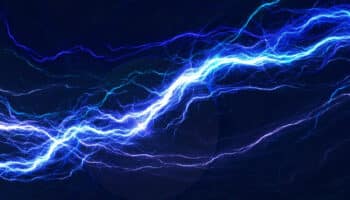 Microwave Sparking: What It Means, and How To Fix It

There’s nothing quite as alarming as seeing sparks in your microwave. If you have a sparking microwave, here’s why it's happening and how to fix it. 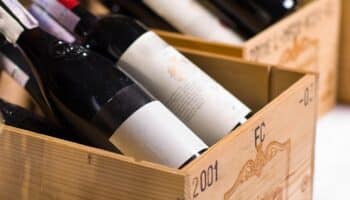 How Much A Case of Wine Weighs: Averages For Each Size

Finding out how much cases of wine weighs can be tricky when it's such a big industry. I've collated averages for case sizes here. 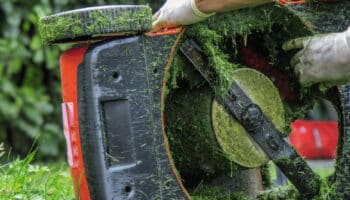 How to Sharpen Lawn Mower Blades (Without Removing Them)

Blunt lawn mower blades can make your gardening life miserable. Find out how to sharpen them in no time with this guide. 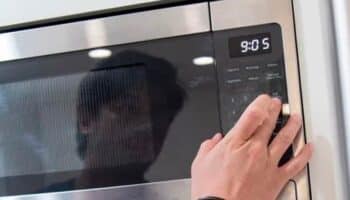 Samsung Microwave Won’t Turn Off? This Might Be Why

Not sure why your Samsung microwave won’t turn off? Then check out the 6 things that could be the matter with it in this article.