Ooni Pro vs Ooni Koda – Which Pizza Oven Is Better?

Ooni Pizza Ovens are known nationwide for their unique design, quick cooking power, and the incredible pizza parties that will leave friends talking.

Two of their most popular models (by far) are the Ooni Koda and Ooni Pro. But what’s the difference? And what would give you more value in return for your money?

The Ooni Pro vs the Ooni Koda is like the full-spec car vs the base model. An Ooni Pro can cook larger pizzas, and cook quicker than the Koda. The Ooni Pro is easier to work with, and can use charcoal or wood. The Ooni Koda is smaller, but also much cheaper and still cooks fantastic pizza.

Sometimes the best way to consider two options is in a winner/loser table. Consider which of the categories on the left might be most important to you and look at which oven does it best (i.e. wide mouth opening for easy cooking).

At the end of the day, both of these ovens are capable of producing fantastic pizza.

I’d recommend picking up the Koda if you’re simply looking to enjoy incredible pizza at home. It’s almost half the cost, but still gives you the same Neapolitan pizza potential.

The Pro, on the other hand, is for the die-hard pizza lovers. If you’re going to be researching pizza cooking techniques, tweaking your recipes, and experimenting with wood/charcoal, then I’d definitely consider the Ooni Pro.

It’s also a much better option if you’re going to be hosting pizza parties. Producing piping hot 16” pizzas like clockwork is enough to keep any party running at a high.

Did you know that there’s also a third option?

This is a bigger, beastlier version of the original. While still only working with gas, it’s capable of handling large 16” pizzas (hence the name) with a wider mouth opening and thicker pizza stone.

In fact, this new Koda provides even more cooking heat than the Ooni Pro! It’s a true furnace you can have at your fingertips.

While it still can only cook with propane (converting to natural gas is also possible), this massively powerful oven is still $100 cheaper than the Ooni Pro. Making it a fantastic middle-of-the-road option for pizza lovers with big appetites or lots of friends (or both!).

With all of our contenders introduced, let’s look at all the numbers comparing these ovens.

Again, consider which aspects in the left column would be most important to you. Do you need low cost, ease of use, or raw cooking power? Knowing what you prioritise makes it much easier to choose the best option for you.

From the numbers it’s clear that Ooni brought in the Koda 16 to satisfy their demand for an oven which packs plenty of power without the added quirks (and costs) of the Pro. The Ooni Pro vs Koda is now a 3-way debate which caters to every option.

It’s important to note that all three of the pizza ovens are in the top-tier of product quality. The only change is within their capabilities shown in the table above. Unlike some companies, Ooni don’t vary their craftmanship with their cheaper models. Each oven is put together with sturdy metal elements using either Carbon Steel (Kodas) or Stainless Steel (Pro).

Ooni Pro vs Ooni Koda for…

Since each oven is made for a different user, and all are top quality, it’s impossible to give an ‘overall’ recommendation. Instead of declaring an overall winner, let’s look at which oven might be better for different uses.

Ooni Koda. For newbies and those just getting their toes wet, the original Ooni Koda is the best option. It’s cheap, so if you don’t use it regularly you’re not losing out. It’s also more than capable of still producing amazing pizza. You can still host pizza parties, it just might be a little slow to get everyone fed.

Ooni Koda. For little ones without big appetites, the Koda is again the best option. It’s more than enough to help instill the love of cooking great food together. The smaller pizzas won’t be an issue, and any parent knows it’s always great to save money.

Ooni Koda 16. Hosting a party of adult friends or family? It may be worth upgrading to the Koda 16. It’s built to tackle large pizzas at a fast rate – without sacrificing on quality. It’s the fast road to becoming hailed as the family pizza hero. While the pro is capable of the same, it’s $100 extra and trickier to take advantage of it’s wood/charcoal fuels methods without sacrificing speed.

Ooni Pro. There’s some of us who just can’t resist perfecting whatever they do. This is who the Ooni Pro is for. It’s combination of the widest opening and largest pizza stone give you the best foundation to create your masterpieces. Not to forget experimenting with wood or charcoal to provide that extra depth of flavor woven through your cooked pizza dough.

Ooni Koda. Personally, my rule for pizza ovens is that you need to cook more than one pizza whenever you light it up. Otherwise, it’s going to feel like too much effort to cook one pizza. Before you know it you’ll be on the phone to the local pizza takeaway. So for those who are more likely to be cooking for just 1 or 2 people, I recommend sticking to the smaller 12” pizzas from the Koda. These are a perfect size for one, and for experimenting with different toppings for 2 or 3 people.

Ooni Koda 16 x2. If you’re hosting massive parties of 15 or more people, or thinking of a commercial venture, Ooni’s best offering is their Koda 16. It packs the most power, and gives you the best bang for your buck. It’s only downside to the slightly larger pro is a smaller opening and pizza stone. But that won’t be an opening once you (and a friend/chef) have the cooking process nailed down.

Still Unsure? Here’s How to Decide

These pizza ovens aren’t cheap, but no-one wants to get stuck with something too small or irritatingly slow. Especially when you’re trying to host guests?

So how can you tell which oven is going to be perfect for what you need?

Sometimes, the best way is to look at the various categories which you can summarise a pizza oven with.

I’ve listed each type of factor below. Look at each one, and try to rank them in terms of priority for you. Then, once you know what’s most important, look at which ovens are best for what you value most (using the tables above).

Ooni aren’t the only great pizza oven manufacturer. They’ve got competition, and boy are their competition good.

Their two main competitors are…

The Roccbox, by Gozney 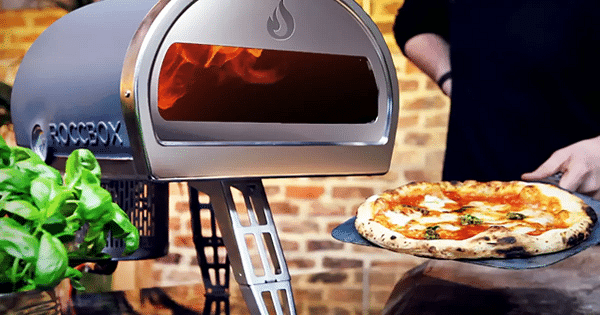 Compared to an Ooni oven, the Roccbox is an entirely different size and style. Designed almost like a 1960’s coupe, it’s got a look which is as classic as the pizza you can cook with it.

Packing a similar level of power as the larger Ooni models, the Roccbox excels with a wide opening size and functional thermostat on the side.

I’d put it at an equivalent to the Ooni Koda 16.

See our full comparison to the Ooni Pro here. 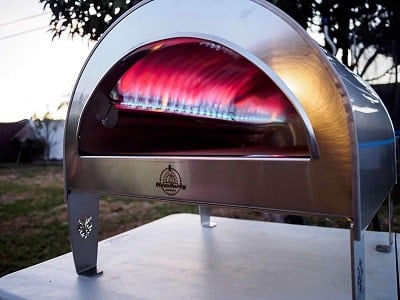 Coming straight from Italy, this Pizza Oven by Ardore is the most traditional of all models.

It’s large, powerful, and is entirely, literally Italian. It’s made and shipped from the home of pizza itself – Italy.

Even the stone used within the oven is the ‘sacred’ stones from Naples – a key requirement for any “official” Neopolitan pizza.

See how the Ooni ovens compare to the Roccbox and Ardore models in our comparison guide here.

I’m Getting Hungry.. Let’s Wrap Up

Choosing a pizza oven can be a life changing decision.

All of a sudden you can create authentic, piping hot pizza from home. As delicious, or even better, than the best local pizza restaurant around.

At the same time these ovens aren’t cheap, so it’s important to choose the right one.

I hope this quick guide has helped simplify the differences between the Ooni Pro vs the Ooni Koda. Whichever you choose, be assured that they’re both quality ovens. Either will let even the most beginner chef produce tantalizingly great pizza.

If this guide’s helped you, please consider supporting us by checking out some of our related articles below.

Thanks for reading, and bon appetit! 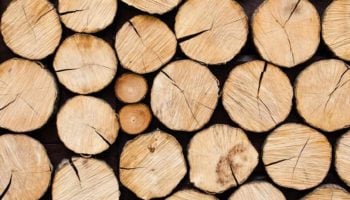 The Best Wood For Your Tastiest Ever Pizza Oven Recipes

Choosing the right wood can change a smoky furnace into intense, taste-filled flame. Take your pizza to the next level with our recommendations. 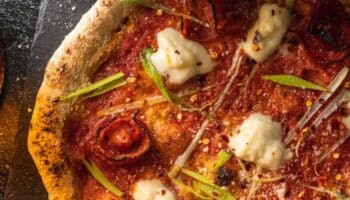 Comparing A Roccbox vs Ooni In 8 Different Categories

The two most popular pizza ovens out there: The Roccbox & The Ooni Pro. Find out which is better for a home pizza chef in this comparison. 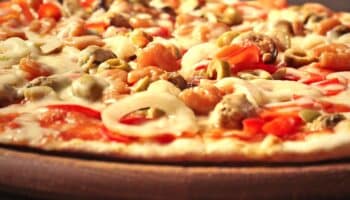 How to Season A Pizza Stone – The Easy Way

Get the most out of your pizza stone by giving it a good layer of seasoning. Explained simply in this quick seasoning guide. 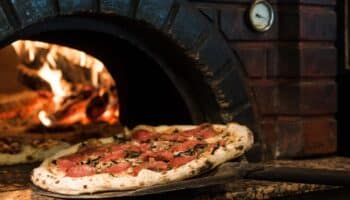 The Best Design Ideas for Outdoor Fireplaces with Pizza Ovens

Create the ultimate garden paradise with a roaring fireplace AND a pizza oven. Find out how incredible these can look in this guide.