Water softeners are a very reliable way to remove rough minerals and hard water ions from the water supply at your home.

Water softeners take hard mineralized water with high concentrations of calcium and magnesium and separate the hard water ions. This provides you with “soft water” for your taps and showers.

When your water softener is not an option due to high levels of iron in your water supply then that is when you need to seek out an iron filter to clean out the decontamination.

Are you confused about whether you should be purchasing a water softener or an iron filter for your home? Do not worry, this quick comparison guide is meant to clarify any confusion you may have about the two water supply purification products.

I will be comparing the basic functionality of both a water softener and an iron filter in this article as well as the specific circumstances of which one to use in certain situations.

I’ll also be covering why one of them may be a better fit for you specifically over the other.

Now that we have gone over the basics of what this guide will cover, let’s begin by comparing these two products and how different they are in terms of their features and functionality.

How Does an Iron Filter Work?

Right off the bat, it is important to note that both a water softener and an iron filter essentially function pretty much the same way. They both use certain substances to filter out their respective contaminants from the water supply.

An iron filter unit contains a “media bed” which is filled with an oxidizing agent to attract soluble ferrous iron and convert it into an insoluble form.

The media bed with the oxidizing agent is negatively charged and attracts the ferrous iron particles towards it to separate the iron particles from the water supply.

This insoluble form of iron is then caught using the special filter of the iron removal unit and is separated from the now iron-free water.

The iron filtration system is able to maintain itself using a periodic backwashing cycle which is able to clean and flush itself to remove any contaminants. This removes the filtered iron.

Another way it maintains itself is through regeneration which means that after backwashing it fills itself with new cleaner water. This refreshes the oxidizing ability of the media bed.

How Does a Water Softener Work?

Water softeners also work a lot like magnets. They are almost identical to iron filters in the way they function. They clear up your water of any unwanted hard water ions. They also use a media bed just like iron filters to separate minerals and other hard ions from water.

Where the two types of systems differ is involving the media solution in the media bed.

While iron filters use an oxidizing agent like manganese dioxide, water softeners use negatively charged resin beads to separate hard water ions from your water which is at that point already softened up.

The water is sent back out but this time with sodium ions instead, making it “softer” than before and safer for not only your water supply pipes but for you as well if you are planning to consume it.

Why Do You Need an Iron Filter?

If you are still noticing that even after getting your water tested the iron levels are below 5 milligrams per liter, then that means that you are in the clear and do not require an iron filter.

However, if the tested water shows higher levels of iron, then you are at risk of having your water softener malfunction and should immediately cease using it.

This is when you should start looking into getting an iron filter to clear out any heavy iron contaminants in your water supply.

High levels of iron prevent the resin of the water softener to do its intended job by sticking on to and coating the resin beads.

The resin beads are what essentially allow the water softener unit to separate hard water ions and supply you with soft water. You should definitely make sure that the resin bed stays intact and is still usable.

Due to the risk of damage involved to a water softener at such high levels of iron, I would highly advise against using it.

It is much better to be safe than sorry at this point and the best way to do that is to get yourself an iron filter unless you want an expensive repair bill for your water softener.

Iron filters are capable of removing high levels of iron of up to 15 milligrams per liter of clear water iron.

Why Do You Need a Water Softener?

As explained, water softeners quite literally remove hard water ions from your water to soften it up.

So now you may be asking yourself, why do I need to soften up my water? Isn’t it fine the way it is? Well, it certainly may taste fine to you but there’s a lot more going on with your water supply than you may actually not know about.

Hard water ions are made up of minerals such as magnesium, zinc, and iron to name a few.

Over time if left unchecked, these minerals can cause rusting in your pipes and can also leave a crusty residue which slows down and even clogs up your water from flowing through your pipes like it normally does.

If you’ve ever personally experienced that crusty residue inside your shower head or your taps, then you know just how annoying it can be to have hard water running through and damaging your pipes

Too much crusty residue buildup can lead to your pipes getting clogged which is never a good sign as it can further lead to even more serious long-term damage.

Of course, there are limitations to how much a water softener can remove.

Small levels of iron of up to 5 mg/L can be removed by water softeners. However, any more than that and the iron will start clinging on to your water softener’s resin beads.

This will lead to your unit not performing its basic function of softening the water correctly.

Now you know the basic differences between both a water softener and an iron filter. You can now make a decision based on which of these two appliances would personally suit your requirements at home.

I hope this article was also helpful for those who currently own one of the two or even both of the appliances being compared here.

Hopefully, you have learned something new through this comparison that you may not have been aware of before today!

Remember, if high iron concentrations are an issue for you then I would recommend going for an iron filter.

However, if iron is not the culprit, then it most probably could be other small minerals and maybe even hard water ions. If that is the case then a water softener would be the more suitable option to go for.

I hope you enjoyed reading this comparison guide!

If you had a great time while reading this article then make sure to take the time out and give some of our other articles a quick glance. You never know, you may find something that’s well suited to your tastes!

Thank you for reading and have a great day! 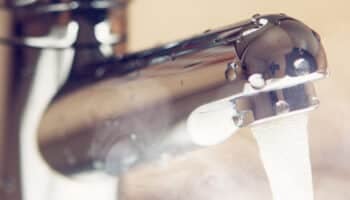 Is your hot water suddenly too hot? It might be time to get your water heater a few replacements. Here’s 5 potential causes & fixes: 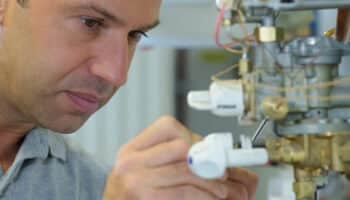 Just Moved In And The Hot Water Isn’t Working? 9 Steps To Follow

A lack of hot water can be caused by numerous things. Find out what to look for when you’ve just moved into a new house and have no heat.
Water

Is Your Water Filter Stuck? Here’s 6 Tips To Try

Is your water filter stuck? Use physics and common household objects to your advantage. Here’s 6 tips to try. 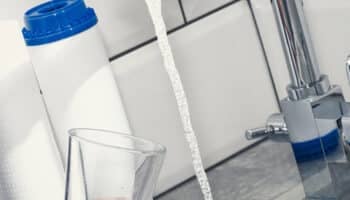 Water filter keeps popping out? Something inside it might be loose and wreaking havoc. Here’s 4 fixes to try.