Chiminea vs Fire Pit: What’s Better Against the Dark & Cold?

Who doesn’t love to sit around a fire? Maybe in the great outdoors, where the fire is built inside a circle of stones. Or maybe on your deck in the backyard.

If it’s the second, you’re not building a fire on the ground. There are a lot of choices, but when it comes to outdoor heating, the showdown often ends up between two types of fire foundations —a chiminea vs a fire pit.

Since these two are amongst the most popular choices, I’ll curate an exhaustive selection of research. By the time you reach the end of this article, you’ll know everything you need to know about chimineas and fire pits. More importantly, you’ll be able to make an informed decision about which one is right for your circumstances.

A chiminea is a frontloading, freestanding fireplace. The main body is traditionally round with a vertical chimney on top. Backyard fire pits are available in a variety of vessels, including a circle of stones. Chimineas typically burn firewood, where fire pits burn a variety of fuels.

Differences Between Chimineas and Fire Pits

Let’s start off with the most basic differences between the two.

While modern chimineas are used more for entertainment purposes, the traditional chiminea had a much humbler purpose.  Traced back to Spain, they were used in the household some 400 years ago to heat and cook.

While the historical models were all made from fire-baked clay, three basic types are available today:

Depending on the type of chimenea you purchase, you are limited in fuel selection. If you chose a fired clay model, you can only burn dry wood. The other two options—cast iron and cast iron/steel combos—will burn charcoal, coal, and wood.

Over the years, fire pits have become increasingly more popular. One of the best features is that the fire is visible to everyone since the fire is in an open container.

Fire pits are available in a variety of materials:

Whichever material is used, it’s made into a large container that will contain the file. The container is then mounted on a stand so it’s up off the ground. The container can be left as is, but you’ll often see them surrounded by stone or pavers.

Chiminea vs Fire Pit: Which One is Safer?

Before we delve deeper into the which is safer debate, a word of warning.

Check with your local bylaws before you buy either a fire pit or a chiminea.

A quick search for the laws in New York City says that all outdoor patio fireplaces, hearths, fire pits, chimineas are illegal there.

Chimineas, which only burn dry, would are also illegal in my city. Wood or coal burning fire pits are too, but natural gas or propane fire pits are allowed, assuming they are CSA/ULC approved.

Where I live, having a wood-burning fire is against the Fire Code and has a maximum fine of $50,000, 1 year in jail, or both.

If they’re legal where you live—or if you have neighbors who would never think of ratting on you—here’s what you need to know about safety.

Assuming you aren’t thinking about buying one of the above-mentioned natural gas or propane fire pits that have that nice CSA/ULC label on them, chimineas are typically safer than fire pits.

Thanks to the stack or chimney on the top of a chiminea, flames are directed up and out. This leads to a much more controlled burn over what a fire pit can offer.

Ultimately, this means you, your family, and friends don’t need to worry about random sparks or flames shooting out at them and possibly getting out of control, or having a fire extinguisher handy.

And remember, the chiminea was initially designed to be used indoors, so it works to keep the smoke away from anyone sitting close. Air enters in through the front of the stove and is pushed out through the smokestack, pulling the smoke from the fire with it.

Having said all that, the body of a chimenea will get very hot. You need to be sure no one gets too close to it.

A fire pit wins hands down on this standoff.

Fire pits are open and offer a 360-degree area for heat distribution. Meaning everyone sitting around it can benefit from its warmth. If you have larger gatherings of family or friends, this is a definite advantage.

Another heat advantage to a fire pit is the fact you can add as much fuel as you want—assuming your fuel of choice is wood or coal. So if you need more heat, you just build a bigger fire. However, keep in mind that larger fires can get out of control.

On the other hand, a chiminea will not offer all-around heat as they are only open to one side. Only those sitting close to the opening will have the advantage of significant heat.

A chiminea will also take longer to produce heat due to its restricted air access.

For fairly obvious reasons, a fire pit wins here too.

If your objective is for your heat source to also offer illumination, go with the fire pit.

As mentioned above, the fire pit is open all-round. So it offers light to an entire area. Whereas with the chiminea, the heater is mostly enclosed. At least in typical, traditionally styles models.

And thinking about light sources should also lead you to consider things like ambiance and atmosphere. While not as important as the actual need for light, in my opinion, they are an important part of the equation. Or at least they should be.

And okay, I admit to using my writerly skills to make one appear better than the other. So create your own pictures. What conclusion do you reach when you compare them?

Chiminea vs Fire Pit: Ease of Use & Maintenance

Nobody likes to spend a lot of time babying their appliances. Not even their outdoor heaters.

Let’s talk about ease of use first. For the most part, that would be how easy or difficult is it to ignite and then keep your heater burning.

Frankly, if ease of ignition is your major concern, you can stop searching for answers and head out and buy a natural gas fire pit. Assuming you can run a gas line to where you want to put your fire pit, of course. If not, a propane model is the next best, but you have the hassle of filling tanks.

Propane fire pits will be portable, but depending on how you hook up your natural gas line from the house, you may not have any or much portability.

It’s sort of like the difference between a natural gas or propane BBQ.

Natural gas—or propane—fire pits are going to be easy to ignite and easy to maintain. And depending on fuel costs in your area, they’re also fairly cheap to operate.

If you go with a wood-burning fire pit or chiminea you need dried, cut logs. You’ll also need to know how to start and maintain a fire. If wood isn’t your thing, you can also use self-lighting charcoal briquettes, but you need to pay strict attention to the manufactures’ warnings when using them in a chiminea. Hardwoods are preferable.

Clay chimineas will need to be resealed every few months.

There are a few things to think of when it comes to size.

Chimineas tend to be quite heavy, but they need to be protected in the winter months. So storage space and the ability to move them should be considered. The alternative is buying a protective cover for them.

Fire pits come in a variety of sizes, but the smaller portable models will be easier to store.

This applies to the container in a fire pit or the container of the chimenea. Does what you’re looking at have enough space in the pit or bowl to hold standard-sized logs? If not, are you prepared to grab an ax and chop them down to the necessary size?

If you only have a small patio or deck, a chimenea will be sufficient.

If you have a large backyard and want to heat a greater area, consider a fire pit.

That’s an awful lot of information about Chimineas vs Fire Pits, isn’t it? So let me break it down into smaller bites for you.

Buy a chiminea if:

Buy a fire pit if:

If you’re still reading, hopefully this information has been helpful for you. There really is a lot to think of if you’re trying to decide between a chiminea or a fire pit.

Be sure to check out the related articles below! 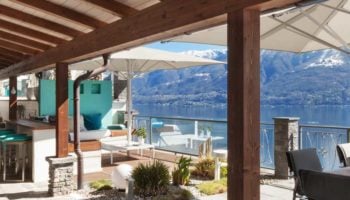 The 6 Best Hanging Patio Heaters to Stay Warm With Style

Hanging patio heaters are a great way to stay warm outside without losing on floor space. We've covered 6 of the best options in this guide. 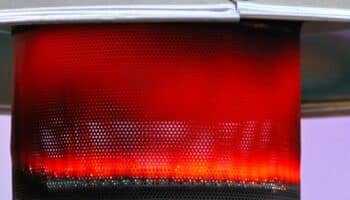 How Much Propane Does A Patio Heater Use? [Guide]

We've gone through the numbers to gauge how much propane an outdoor heater uses, how much it costs, and what size of heater you need. 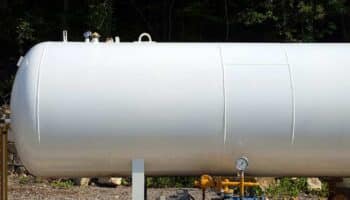 Propane can be a confusing world to anyone unfamiliar. This article simplifies it by showing you all the tank sizes, their recommended uses, and more tips. 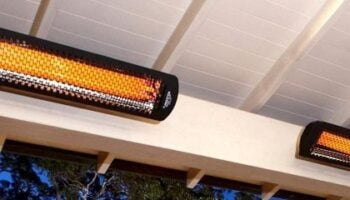 The Best Electric Patio Heaters to Keep The Party Outdoors

Shrug off cold nights with these best electric patio heaters. Simple to set-up, plenty of heat, no fumes, and full peace of mind.