Carbon Steel vs. Cast Iron Pans – What’s Worth The Money?

If you like to cook, you know that your tools make all the difference. Using the right ingredients, the right knives, and the right pans can help elevate a recipe from good to great. The problem is finding the pan that works for you.

There are so many types of pan that it can get confusing, so why not look to the professionals? Serious chefs use both cast iron and carbon steel pans daily in professional restaurants worldwide. I wanted to learn more about the difference between these top-tier types of cookware, and here’s what I found:

Ready? Then let’s dive in.

How are Carbon Steel and Cast Iron Similar?

This video is a good explanation of how cast iron and carbon steel compare. I’ve summarized the information below.

Cast iron and carbon steel share a lot of similarities. If you’re trying to decide whether to buy a new pan in the first place, then understanding why these pans are so well-loved can help.

Both cast iron and carbon steel pans are:

How are Carbon Steel and Cast Iron Different?

So, what make these two materials unique?

Material. The first difference between carbon steel and cast iron is the material itself. Steel and iron typically have some trace carbon as part of their mix.

Resilience. Carbon is a crystalline structure, so it’s not as flexible as pure steel. The more carbon is part of a pan, the less flexible it is. Since cast iron has more carbon than carbon steel, cast iron pans aren’t quite as resilient. If you drop a carbon steel pan on the ground, the worse it will suffer is a scuff and maybe a small dent. Cast iron, on the other hand, can fracture if it lands just right.

Shape. Carbon steel pans wind up with sloping, curved side at a 60 degree angle. On the other hand, cast iron pans have straight, upright sides. This can affect cooking in certain styles.

Cooking with cast iron and carbon steel is rewarding no matter what. However, they do have different strengths when it comes to different foods.

If you’re looking to fry things with a bit of style, carbon steel is easier to work with. Tossing things in a pan requires sloping sides with a bit of a curve, which carbon steel pans provide. The material also cools more quickly, so your stir fry won’t burn when you take it off the heat.

Best of all, carbon steel is smoother, so stuff is less likely to stick to the cooking surface.

If you want to roast or broil something, cast iron and carbon steel come out about even. They both move easily between oven and stove. It can be a little easier to move a carbon steel pan, though, because it’s lighter. If you need to finish something in the oven, carbon steel is a good choice.

Skillet breads like a classic cornbread were designed to be cooked in cast iron. The tall sides are ideal for keeping your cornbread or skillet cookie contained while it bakes. Carbon steel can work, too, but the sides will be less crispy because the thinner material doesn’t retain heat as well.

When it comes to creamy pastas, cast iron can be a little better than carbon steel, again because of its straighter, taller sides. However, if you’re looking to make a tomato-based dish, use something else entirely. The acid in tomatoes can quickly degrade both carbon steel and cast iron’s seasoning and lead to rust.

Pros and Cons of Cast Iron and Carbon Steel

Here are the specific pros and cons of each of these helpful kitchen tools.

Pros and Cons of Cast Iron

Pros and Cons of Carbon Steel

How to Season Cast Iron and Carbon Steel

Seasoning is the one difficult part about owning cast iron or carbon steel. However, it’s not hard to do it well. Here’s how to season cast iron and carbon steel like the pros.

There are three reasons to season a pan: it’s new, it’s lost its seasoning, or you’re maintaining its current seasoning. The first and second reasons require an in-depth seasoning process.

Seasoning or Reseasoning a Pan

First, clean any built-up material from your pan. New pans can arrive covered in a wax to prevent rust, while old pans likely have grime stuck to the walls and bottom. Scrub it out with very hot water and a scrubbing pad. Put the pan on the stove on low heat to dry off the water.

Once the pan is dry, slice an onion into the pan. Add a third of a cup of oil and two-thirds of a cup of salt. The salt will scrub any remaining grime out of the pan, while the oil and the onion will create an even, smooth layer of polymerization – the seasoning.

Cook the mixture for about fifteen minutes on medium heat. The onions should be just about burnt by the time you’re done, and the inside of the pan should be evenly brown. That’s the seasoning you want to maintain. Dump the contents of the pan and rinse it out with hot water, and you’re ready to cook.

Maintaining Seasoning in a Pan

It’s much easier to keep your seasoning in good shape than it is to reseason a pan.

To maintain your seasoning, rinse and scrub your pan after you cook with a soft sponge and warm water. Dry your pan on a still-warm burner. Once the pan is dry, add a small drizzle of oil to the pan and rub it into the whole cooking surface. Wipe out the extra oil as much as you can. Now you’re ready to cook again.

What Is Cast Iron? 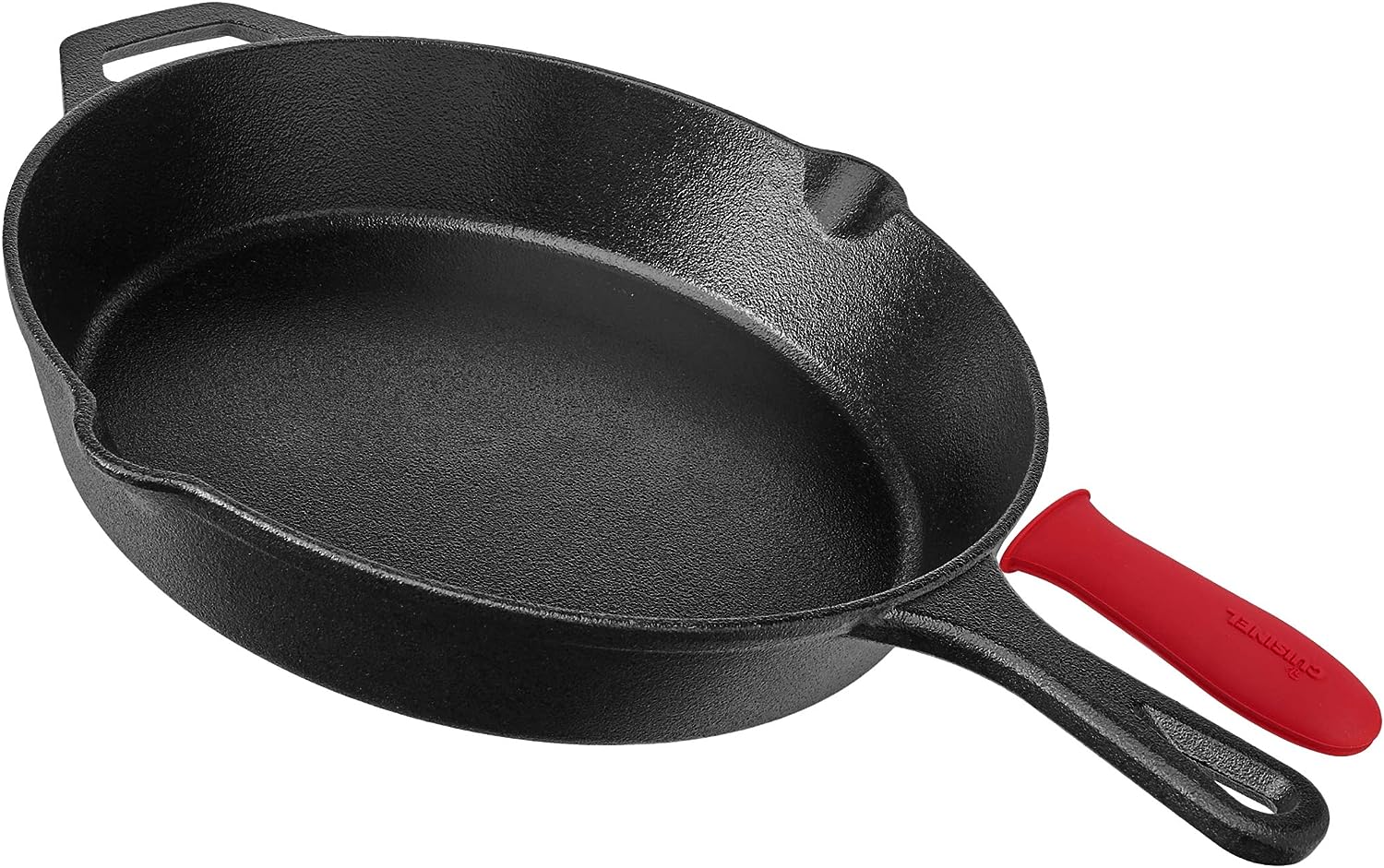 This Lodge-brand cast iron pan with a handle protector is a good example of modern cast iron.

Cast iron is one of the most traditional forms of cookware out there. These pans have been around for centuries, and they were hugely popular in the first half of the 20th century. Cast iron is made by pouring a mixture of iron with at least 2% carbon into a mold and allowing it to cool. The result is a thick, durable, piece of cookware that can retain heat better than anything else on the market.

Cast iron is also relatively cheap. The most popular cast iron manufacturer today is Lodge, who sells 12” cast iron skillets for just $20. That’s comparable to non-stick skillets, and it’s within reach of just about every budget.

Because of how cast iron cookware is made, it has a distinctive shape. Most cast iron cookware has a completely flat bottom with sides that shoot up at a nearly 90 degree angle. The entire cooking surface can be nearly a half inch thick, so it takes a long time to heat up. However, this thick cooking surface also means that it retains heat for a long time, so you don’t have to worry about moving the pan around while you’re cooking.

The molding process results in a thick, lightly pitted surface. Cast iron is great for holding onto its seasoning because of those pits, but those same pits can also cause food to stick if the seasoning is damaged.

What Is Carbon Steel 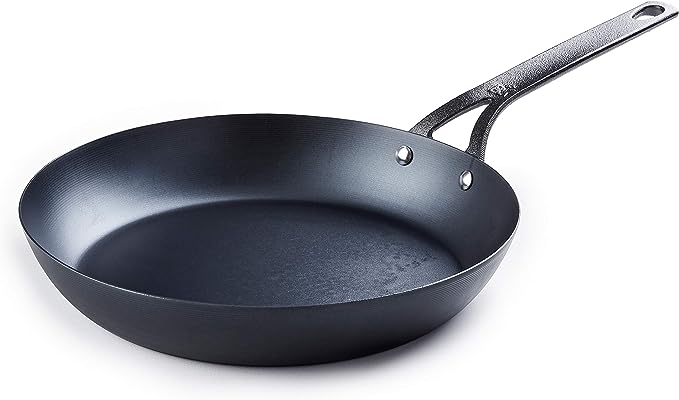 Carbon steel is a more modern cooking innovation. Carbon steel is typically 1% to 2% carbon, while cast iron is more than 2% carbon. (Yes, that means that cast iron has more carbon than carbon steel!) It’s often produced in sheets.

Carbon steel pans are made by putting a sheet of the steel in a large press, which stamps it into shape like a cookie cutter. As a result, carbon steel pans can be thinner, lighter, and smoother. Their super-smooth surface keeps food from sticking, but it’s easier to strip the seasoning from it. The stamping leads to a flat bottom but sloping, curved sides

The thinner, lighter material means that carbon steel heats up and cools down more quickly than cast iron. This can be a great choice for delicate ingredients that can burn quickly. However, if you’re trying to maintain a steady temperature while moving the pan, carbon steel is better than aluminum but not as great as cast iron.

Carbon steel pans are more expensive that cast iron in many cases. Made In, which makes some of the best carbon steel pans on the market, sells a 12” skillet for $90. Other brands retail for $50 to $60 on Amazon for the same size.

Cast iron and carbon steel both have their strengths and weaknesses. Carbon steel is lighter and easier to maneuver than cast iron, but cast iron retains heat better and holds seasoning longer.

Is cast iron the same as carbon steel?

Carbon steel pans are preferred by many professional chefs in Michelin star restaurants. They cook food quickly, they’re nonstick when properly seasoned, and they can be used in the oven and on the stove.

Made In makes some of the best carbon steel pans in the world. Their pans are used in Michelin star restaurants by professional chefs worldwide. Their pans retain heat well, cook quickly, and remain light and easy to handle.

Both Carbon Steel & Cast Iron pans are amazing tools for any budding chef.

I hope this quick comparison has given you some good insight into which would suit your kitchen better. Personally, I’m a huge fan of Carbon Steel (despite the higher upfront cost).

If this content has helped you, please consider supporting us by checking out the related articles below. 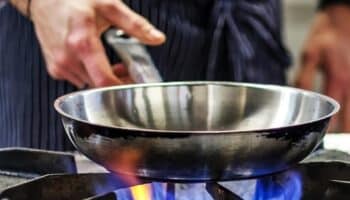 Carbon Steel vs. Stainless Steel Pans: Which Is Better?

If you want to expand your culinary skill, you should explore carbon steel and stainless steel pans. Here are the most important differences between them. 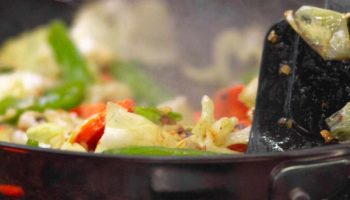 Carbon Steel's used in high end kitchens, and is becoming more and more affordable. But what's it best suited for, and is it worth the cost?

Make opening cans safe and effortless with these smooth edge can openers. We've reviewed the best on the market to help you find your perfect product. 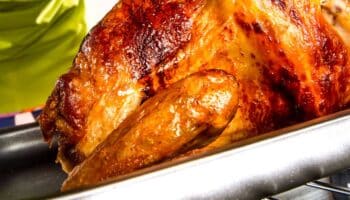 Oven vs grill, which will be the best for you and your family? Take a look at this article where we will discuss which appliance comes out on top when considering a range of features.