Life’s greatest pleasure may well be the unspoiled wild.

From amateur to lifelong devotee, hikers and campers enjoy majesty often overlooked in the modern age. And yet to immerse yourself in nature, you often have to go without one of the competing pleasures: a hot meal fresh off the stove.

Worry not! No longer must we choose! There are now a selection of compact stoves made for the trail.  Many weigh less than a pound and are fueled by nothing more complex than the fallen brush around you! Two standout examples, each very similar, are Fritz Handel’s Bushbuddy and the Solo Stove.

Which one do you want to rely on for your sustenance when away from the world?

While both the Bushbuddy and the Solo Stove are reliable and useful pieces of hardware, the extra features and lighter weight of the Bushbuddy push it to the top for most purposes. However, the budget-conscious or outright clumsy may prefer the Solo Stove, which is a sturdier product at a lower cost.

Read on to find out how they work and to understand their subtle differences!

The Bushbuddy and Solo Stove are extremely close in design. Both are crafted of stainless steel capable of handling the heat of the stove, and each burns the wood and brush you find as you walk or make camp. More key, both stoves use a clever double-wall system to improve efficiency.

The double-wall design of the stoves may be their most ingenious feature. It provides numerous advantages over other designs:

The Solo Stove site provides a very clear How It Works presentation just below the product page.

Of course, all good things come at a price. For these remarkable little devices, that price is not a steep one. Their compact size simply means getting into the fuel chamber for any deep cleaning is a small hassle—but certainly not impossible!

The other pitfall of these stoves is the simple unpredictability of conditions out past a few days. If you can’t find dry wood where and when you’re out in nature, you won’t be able to easily use these. Experienced outdoorspeople shouldn’t be thrown too far off their stride.

For anyone who wants a lightweight stove that can cook for one or a few people using only the fuel you find around you, both the Bushbuddy and the Solo Stove will get the job done well, no doubt about it. Which one is the wiser choice hinges on some finer points and personal preference.

Anyone roughing it with all their gear on their back knows that you want your load to be as light as possible while still being as durable as possible. If either the Bushbuddy or the Solo Stove was both of these, it would be no contest which stove is better. However, this becomes a matter of how much durability is worth the weight.

The Solo Stove Lite weighs in at 9 oz, with the next size up, the Titan, weighing just over a pound. The Bushbuddy, meanwhile, is only 6.4 oz. While back home the difference of 2.6 oz might not seem like a big deal, out on the trail, ever ounce counts.

The Solo Stove’s weight isn’t the result of added features, but rather due to the thicker steel it’s made out of. This thick metal does afford it extra durability, which might be desired by anyone who puts their gear through rougher situations. However, for most cases, the Bushbuddy is absolutely sturdy enough.

Even though the Bushbuddy is significantly lighter than even the smallest Solo Stove, it comes with a few extra features. The cooking ring on the Solo Stove uses three prongs to support your pots, but the Bushbuddy has a fourth, improving stability.

Not only that, but the Bushbuddy employs an extra heat shield which should protect the surface it rests on. In theory, it could even burn for some time on a wooden surface without even singing it (though all cooking with fire should be conducted as cautiously as possible).

The Solo Stove also is designed to dissipate heat safely, but as it only does so through the ash tray, it has a more limited ability. This means it is more able to singe and burn anything it sits on.

However, Bushbuddy now produces the Bushbuddy Mini, which is a mere 4.2-4.5 oz (Bushbuddy is a handmade product, which accounts for the variation). This model is identical to the original other than its lack of the extra heat shield and the ash pan.

Unlike even the Solo Stove, the Bushbuddy Mini really must be set on a safe surface to burn, but at less than half the weight, that might be a price you’re willing to pay.

The Solo Stove trades in ultra-portability for higher durability. While it is a little more prone to overheating the surface you put it on, it’s no less effective than the Bushbuddy.

On the other hand, the Bushbuddy is noticeably lighter while enjoying a little extra stability and a little more heat shielding. The only thing it lacks is the same thickness of steel, making it a little more vulnerable to wear.

Shrinking down to the Bushbuddy Mini cuts down the weight to a fraction of the Solo Stove’s and it only comes at the comparative cost of having no ash pan or heat shielding.

If you favor durability, the Solo Stove comes out ahead, and if you want to shed weight or enjoy the most refined features, the Bushbuddy wins the day. But for the undecided, consider the cost.

At the time of writing, the cheapest of these options is the Solo Stove at $64.99. This is twenty dollars cheaper than the Bushbuddy Mini’s $85 price tag. The original Bushbuddy, with all the bells and whistles, comes out at an even $100.

Considering the lifespan of these stoves, even a $35 difference between the Solo Stove and the Bushbuddy probably shouldn’t tip the scales for any but the most price-conscious shopper. If you can’t pick between the two, though, perhaps this can help you decide.

In the end, you’re not going to make a bad choice. Both the Solo Stove and the Bushbuddy (as well as the Bushbuddy Mini) are excellent products. We lean Bushbuddy, both for its added features and the handmade craftsmanship of the product. However, Solo Stove has earned its place as a competitor.

Thank you for reading! I hope this article has helped you decide between two very competitive choices. If you found this content useful, please consider reading some of our related content below. 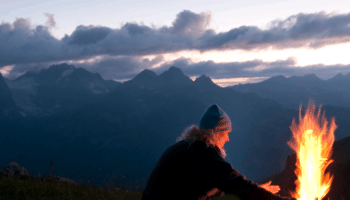 Looking for a wood burning camp stove that's perfect for camping trips? Here's a few reliable, easy-to-setup options for your next adventure. 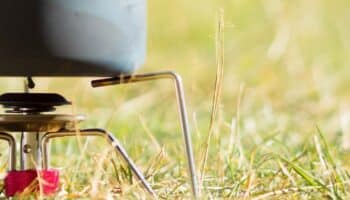 Butane and Propane Stoves are both excellent choices for a camping trip - but they do have their differences. All clearly compared here.